92.3 WTTS Over Easy Presents ARLO GUTHRIE – RE:GENERATION TOUR in the Egyptian Room at the Old National Centre.  Guthrie’s appearance will be Sunday October 15th – 7:30pm, and this will be a seated show. 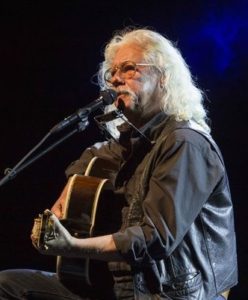 Legendary folk singer-songwriter Arlo Guthrie of Coney Island, New York, is known for his songs protesting social injustice. He is the eldest child of singer and activist Woody Guthrie and professional dancer Marjorie Mazia Guthrie. Arlo’s career took off in 1967 with the release of his anti-Vietnam album, Alice’s Restaurant featuring the widely recognized satirical song “Alice’s Restaurant Massacree,” telling the story of how his citation for littering resulted in the US Army’s refusal to draft him. A couple years later, Arlo starred in the Hollywood film version of Alice’s Restaurant, based on his story. Arlo performed at the Woodstock concert in 1969, and can be seen in the 1970 documentary Woodstock. He had a hit record in 1972 with City of New Orleans. Arlo has since founded the Guthrie Center, which provides many social services including HIV outreach, and he continues to regularly release and perform albums.