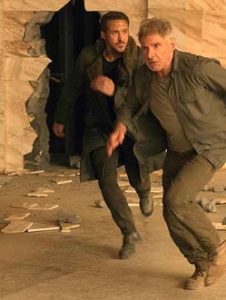 Back in 1982, Ridley Scott released a science fiction film called “Blade Runner.”  The Harrison Ford vehicle didn’t perform particularly well at the box office, but has since become a classic.  It had a visual look as unique as those of “2001: A Space Odyssey” and “A Clockwork Orange.”  The Vangelis soundtrack was second to none.  But convoluted plot caused “Blade Runner” to pale in comparison to the other sci-fi classic of the day, George Miller’s “The Road Warrior,” which also had a visionary style, but was coupled with a tight, intriguing, post-apocalyptic screenplay.

Now 35 years later, Ridley Scott has executive produced a sequel of sorts called “Blade Runner 2049,” which excels in the same areas as the original, but suffers from the same labyrinthine storytelling as the original.  While it’s (fortunately) not necessary to view the first picture, it helps to recall that young Harrison Ford played a Los Angeles police detective assigned to hunt down replicants (bioengineered humans), but winds up falling for one, played by the beautiful Sean Young.

This time Ryan Gosling (fresh off his star turn in “La La Land”) plays the cop, but he also happens to be a replicant himself.  His job is to “retire” older replicants who are no longer useful to society.  (Since they’re not human, they don’t die natural deaths.)  After eliminating a particularly cantankerous model, K (that’s Gosling’s name) discovers a box of human remains on the replicant’s property which turn out to be those born of the cesarean section of a replicant.  Since replicant pregnancy is thought to be impossible, K’s boss (Robin Wright) orders him to destroy all the evidence. 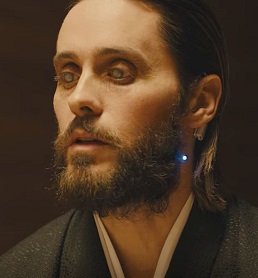 K’s curiosity leads him to the headquarters of replicant manufacturer the Wallace Corporation, headed by the mysterious Niander Wallace (a creepy Jared Leto, whose beard makes him look like the lead singer of Foo Fighters).  Niander has a replicant assistant/assassin named Luv, played by Sylvia Hoeks, who exudes Cruella DeVil hostility even before she opens her mouth.  Without giving away spoilers, K’s investigation eventually leads him to Harrison Ford’s character, now long-since retired and living the life of a hermit.

Once again, the visual ambiance is grandiose, and the soundtrack (this time by Hans Zimmer) is equal to the cinematography.  When the original picture was released in 1982, I was reviewing films for my college radio station.  I mentioned that I would like to see “Blade Runner” with the sound turned down so that I could admire each and every shot.  I feel the same way about “Blade Runner 2049.”  Director Dennis Villeneuve (who made last year’s visually stunning “Arrival”) has perfectly framed every minute of this beautiful film.  In fact, it is so dazzling audiences won’t even question the constant rain and snow falling on what should be the arid landscape of Los Angeles – nor the window air conditioners protruding from the facades of office buildings in what is purported to be a highly advanced society.

But as with the original, I felt like the plot was merely an afterthought – something conceived on a cocktail napkin to thread together the beautiful set pieces.

I also cannot impress upon you how bad Ryan Gosling is in this film.  I know his character is a replicant – so he’s not given to the emotion of a true human.  But Gosling eliminates all passion from his performance – giving us an underwhelming robotic hero, much like that of Ben Affleck in “The Accountant.”  (Again, I realize accountants aren’t typically given to wide-ranging emotion, but a smidgeon of ardor would have been nice.)  Gosling’s stilted acting is further accentuated in the third act when Ford’s character appears on screen and reminds us what “2049” has been sorely missing – a character to care about. 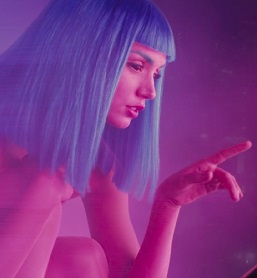 In a strange twist of irony, the most ardent performance of the new characters is that of Joi, K’s holographic girlfriend, manufactured by Wallace Corp.  Played with fervent sentiment by Cuban actress Ana de Armas, Joi is so authentic we often forget K can make her vanish with a click of a remote.\

Still not as good as “Mad Max”