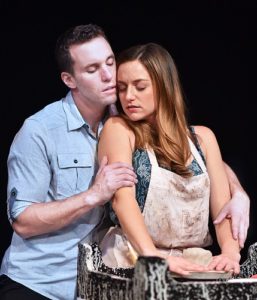 It was the movie with the iconic scene that molded romance at a pottery wheel to the strains of “Unchained Melody,” and made the word “ditto” synonymous with “I love you.” “Ghost,” the famous film released in 1990, has inspired a Broadway adaptation and it’s on stage this fall for the first time at Beef & Boards Dinner Theatre.

The drama, fantasy, and romance of the original film have been adapted for the stage by its Academy Award-winning screenwriter, Bruce Joel Rubin. Ghost the Musical follows Sam and Molly, a young couple whose connection takes a shocking turn after Sam’s untimely death. Trapped between two worlds, Sam refuses to leave Molly when he learns she is in grave danger. Desperate to communicate with her, he turns to a storefront psychic, Oda Mae Brown, who helps him protect Molly and avenge his death. 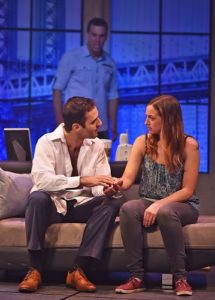 Eddie Egan and Carmel High School graduate Andrea Laxton play the lead roles of Sam and Molly, with Renee Jackson as Oda Mae Brown and Patrick Michael Joyce as Carl Bruner. All are making their Beef & Boards debut in Ghost the Musical. The cast also features Beef & Boards favorites Kelly Teal Goyette (Shrek, The Musical, Beauty and the Beast, Mary Poppins) as Mrs. Santiago, and John Vessels (Shrek, The Musical, Beauty and the Beast, Addams Family, Smoke on the Mountain) as the Hospital Ghost.

There are 49 performances of Ghost, the Musical between now and November 18th in the intimate atmosphere of Beef & Boards Dinner Theatre. Tickets range from $42.50 to $67.50, and include Chef Odell Ward’s dinner buffet, fruit & salad bar, unlimited coffee, tea, and lemonade. Ample free parking is also available.

Ghost, The Musical is rated PG-13 due to violence and adult language.