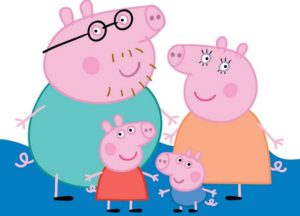 Peppa Pig, the #1 family show of 2016, is back with an action-packed live show featuring your favorite characters as life-size puppets and costume characters in Peppa Pig’s Surprise!  Come join Peppa, George, Mummy Pig, Daddy Pig, and more in an all-singing, all-dancing adventure, full of songs, games, and surprises!  Peppa Pig Live! comes to the Murat Theatre at the Old National Centre Friday, November 3rd at 6:00 PM.

Peppa Pig is a British preschool animated television series, directed and produced by Astley Baker Davies, which originally aired in 2004, went on hiatus for two years, and re-premiered in February of 2015. To date, four seasons have been completely aired, with a fifth currently airing. It is shown in 180 territories.

What is Peppa Pig?

Peppa Pig is seen on Nickelodeon/Nick Jr. in the United States.  Each episode is approximately 5 minutes long. The show revolves around Peppa, her family, and her friends. Each of her friends is a different species of mammal.  Episodes feature everyday activities such as attending playgroup, going swimming, visiting their grandparents, going to the playground, or riding their bikes.

Tickets for the November 3rd performance are on sale now.  For more information, visit PeppaPigLiveUS.com, or call the Murat box office.