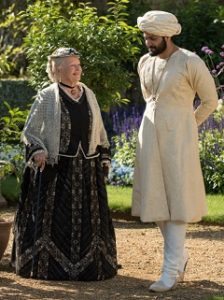 Twenty years ago, Judi Dench played Queen Victoria in John Madden’s “Mrs. Brown,” a re-telling of the queen’s unlikely friendship with a Scottish servant named John Brown, and the uproar their relationship caused amongst those in the royal circle.  Now fellow British director Stephen Frears has churned out a sequel of sorts – “Victoria & Abdul,” a rehashing of another of the queen’s odd affinities, this time with a Muslim Indian servant named Abdul Karim, played by Bollywood actor Ali Fazal.

While I admired the earlier film, this one is the superior work.  “Victoria & Abdul” is more than simply another story about the lady who was once the longest-serving monarch in world history.  This one has a racial undertone which gives Frears’ picture a more modern feel, and a more important place in film history.

Abdul comes to London in 1887 to present the queen with a ceremonial coin from India – a country about which Victoria and those in her inner circle know very little, even though it had been part of the British Empire for 29 years.  Victoria takes an instant liking to Abdul when he breaks protocol and looks the empress in the eyes.  The twinkle in his spur one in hers.  At their next meeting, Abdul kisses her feet.  And a unique friendship is thus born.

He treats the queen as human 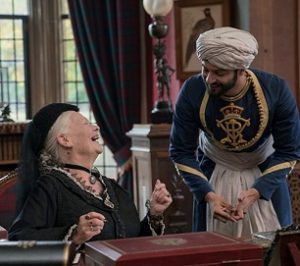 Initially employed (although not provided an official title) as a personal servant of sorts, Abdul teaches the Hindi language to the queen, per her request, and instills a wealth of knowledge about his country – which of course is under the umbrella of her empire.  The others (palace staff, the queen’s eldest son, and even the prime minister) are jealous of the queen’s interest in Abdul.  Frears deftly handles their relationship as platonic – Abdul is in fact married – as he unfolds the real reason behind what makes their extraordinary affiliation click.  Abdul treats the queen as a human being rather than as an institution.  Even her son Bertie (Eddie Izzard) is simply waiting for her to die so he can become king.  But Abdul takes a genuine interest in Victoria, and eventually stays on at the palace until her death in 1901.

The aforementioned racial undercurrent is borne out via Bertie, the staff, Sir Henry (the queen’s private secretary), the queen’s personal doctor, and others.  It’s one thing that they are jealous of the attention Abdul receives from the queen.  It’s quite another that their justification is that he’s “just an Indian,” “a lowly Muslim,” and so forth.  While the queen was not known as progressive (and she did rule over an expansive colonial empire), she is depicted as such here – albeit more due to a lack of knowledge on her part than a genuine interest in her subjects.

We cheer when the queen puts her close-minded cadre in their proverbial place, and it’s always enjoyable to watch a British film ridicule the utter stuffiness of their own authority, but this is a far milder version of the in-your-face bigotry we saw this summer in Kathryn Bigelow’s “Detroit.”  “Victoria & Abdul” is as British as “Detroit” is American.  That’s not necessarily a criticism; just don’t expect your biased uncle to come away from this film a changed man.

As you might expect, Dench is brilliant as the queen, although this is admittedly a role she could have played in her sleep.  Fazal is strong too, with the caveat that when his eyes twinkle at the queen, he’s mugging for the camera.  I love that Abdul wants to please the queen; I wish that Fazal had been a tad less eager to please us.

“Victoria & Abdul” is another strong picture this fall season, and I’d venture to call it Frears’ best work since “The Grifters” (1990) and maybe even since “Dangerous Liaisons” (1987).  At age 76, Frears needs a late-career crowning achievement.  “Victoria & Abdul” does it for him.  Same with 82-year-old Judi Dench.  While I don’t believe it’s this year’s strongest performance by an actress, the academy may see fit to award her the Best Actress statuette anyway.  She’s been nominated many times before, she probably won’t have another role this juicy, and the academy has always loved British cinema.

One of year’s best so far

For me, I’d put it on my list of the year’s best films, keeping in mind that some of the year’s likely finest work is yet to be released.  “Victoria & Abdul” is a crowd-pleaser, and should be a hit – even outside the arthouse world.