Year by the Sea 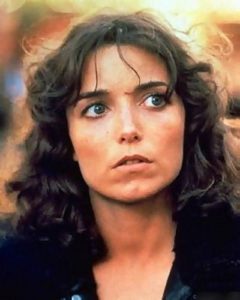 Quick.  Name a Karen Allen movie.  Karen Allen, you say?  Isn’t she the gal from “Raiders of the Lost Ark?”  Exactly!  Gee, I don’t know if I can name another one, Andy.  Don’t worry about it, my friend.  It’s been so long since Karen Allen has been in a starring role, I had to consult Wikipedia myself.

Could have been major career boost

Much as with Bruce Dern in Alexander Payne’s “Nebraska,” Karen Allen is about to receive a late-career boost with her leading lady turn in Alexander Janko’s new film, “Year by the Sea,” based on author Joan Anderson’s year in a small New England town.  With her marriage in a perpetual rut, Anderson’s husband Robin (playwright Michael Cristofer) is transferred to Wichita, and Anderson refuses to go – instead opting for a year in a rental house in an unnamed fishing town on Cape Cod, a deal she finds in a junk-mail brochure.

Of course, Robin doesn’t understand Joan’s need to be alone.  And at first, we don’t either.  While certainly comfortable, their marriage seems fine.  Since this is Hollywood, we presume she needs to “find herself,” whatever that means.  And sure enough, Joan spends the next 90 minutes of screen time doing just that – befriending the locals, taking a day job that somehow seems “beneath her,” and spending lots of time alone. 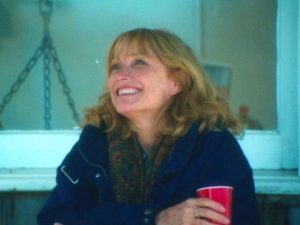 While it’s great to see Karen Allen again (and at 65, she’s still cute), “Year by the Sea” devolves into a grating exercise in self-help clichés.  When Joan asks a local fisherman if he ever gets lonely out on the sea alone, he responds, “Real loneliness is not knowing who you are.”  Cue the music.  In the very next scene, Joan will discover something about herself.  When a confidant asks Joan if she likes who she is, she utters, “I’ve just started to like who I could be.”

Could have been TV movie

And so it goes.  The screenplay (adapted by Janko) is so poorly written, this could have been a television movie of the week thirty years ago.  Don’t get me wrong.  It’s a joy to review a Karen Allen picture, but I’d rather she’d venture to Sicily, Alaska, and spend a year with the cast of “Northern Exposure.”  At least those characters were interesting, and didn’t speak in overused adages. 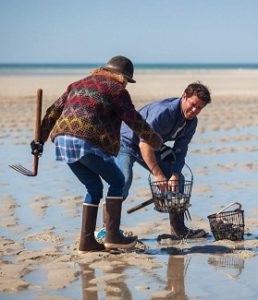 As far as the locals are concerned, Yannick Bisson plays the local fisherman and store owner who hires and befriends Joan – fortunately in a platonic fashion.  Celia Imrie is the local free spirit who teaches Joan how to let down her guard.  Unfortunately, her character is so overwrought I found myself wanting to put a muzzle on her.  I realize that the structure of the script requires such a character, but Imrie turns up the bohemian dial to eleven.  Ruth Gordon (in “Harold and Maude”) didn’t have anything on Imrie.

The most interesting supporting characters are the local general store clerk Luce, played by Monique Gabriela Curnen – a sweet young woman with an abusive alcoholic husband – and Joan’s husband Robin.  These are the only two characters I found myself able to relate to.  Robin seems like the only “normal” character in the entire film, and while Luce fills the role of giving Joan someone to help, Curnen brings just the right amount of chutzpah to the character to keep Luce from being pathetic.

I do have to credit Janko in one respect (and this is probably more a compliment to Joan Anderson, the author of the source material), and that is that these characters remain essentially loyal to their spouses.  There’s not a lot of the bed-hopping we find in Woody Allen’s movies.  In fact, sex plays no role in “Year by the Sea.”  And that’s refreshing.

I’m sure author Anderson had a once-in-a-lifetime experience during her year on Cape Cod.  I’m also sure I would have enjoyed experiencing it with her – had the screenplay been re-written by someone else.  Heck, anyone else!  Don’t get me wrong.  I loved Janko’s work in “My Big Fat Greek Wedding.”  But here, he falters big time.

I wanted to like “Year by the Sea.”  I love the premise, and I love the set-up.  I love the fact that this is a real story, adapted from the memoir of a New York Times best-selling author.  But I hate the dialogue.  Nobody speaks the way these characters speak.  People aren’t this self-knowing.  Some of the lines are laughably bad.  I’m glad Karen Allen is back.  Now she needs to do something memorable.  Perhaps next time.