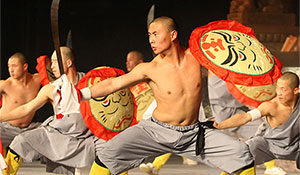 Established in 1957, the Martial Artists and Acrobats of Tianjin of the People’s Republic of China is one of that nation’s top acrobatic troupes, with more than 100 performers enacting feats of acrobatics, magic and martial arts. The company has performed throughout Europe and Asia, and its members also have performed their acts with Cirque du Soleil, Ringling Bros. and Barnum & Bailey, and other leading circus attractions.