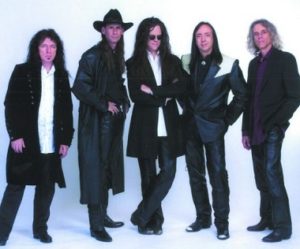 On Saturday, September 30 at 7:30 p.m., Hotel California will bring the instantly recognizable sounds of legendary super group The Eagles to Emens Auditorium, located at 1800 W. Riverside Ave. in Muncie, on the campus of Ball State University. The show at Emens will boast recreations of classic mega-hits by the Grammy award winning Eagles such as “Take It Easy,” “Heartache Tonight” and “Hotel California.”

Comprised of five respected, multi-talented top music industry professionals and founded with the intent of filling the void left by the demise of The Eagles in 1982, Hotel California blends their extraordinary vocal and musical talents together to faithfully and accurately reproduce the sound of The Eagles’ studio recordings. Bringing the timeless music into the new millennium, Hotel California recreates a classic sound that undeniably transcends the boundaries of rock, rhythm and blues, and country while also delivering a modern, action packed performance.

Hotel California has toured relentlessly from the ‘80s to now, setting the standard for world-class tribute productions and sharing stages with the likes of The Doobie Brothers, Lynyrd Skynyrd, Gretchen Wilson, and REO Speedwagon. As the group continues to tour internationally, their stage show has evolved into one of the most impressive and popular productions on the North American soft-seat and festival circuits, each concert presenting an exciting showcase of The Eagles’ major hits as well as newer releases such as “Get Over It” and “Love Will Keep Us Alive,” and select titles from the solo works of Don Henley, Glenn Frey, and Joe Walsh.

Tickets are on sale now at the Emens Auditorium box office, all Ticketmaster outlets and online at http://www.ticketmaster.com/