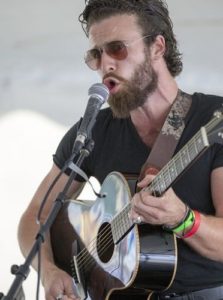 Brandon Whyde returns to his hometown of Indianapolis, Ind. for a very special album release show at HI-FI (1043 Virginia Ave.) on Saturday September 30 at 9 p.m. (doors 8 p.m.). In addition to performing songs from his latest album Silver Apples of the Moon, Whyde will be joined on stage by a number of special guests including Jennie DeVoe, Charlie Ballantine, Jesse Wade, Amanda Gardier, and more. The entire performance will be filmed and recorded live for future release. James LeBlanc, Keller & Cole, and Cory Williams will open the show.

About the new album

On his new album Silver Apples of the Moon, Whyde gives listeners a glimpse into his past, one that includes heartbreak, loss and self-discovery. His voice has been described as soulful, whiskey-soaked, and even “a freight train on fire,” qualities that shine through on his latest release. Silver Apples of the Moon was recorded with Grammy-winning producer Jimmy Nutt in Muscle Shoals, Alabama. The album includes a number of veteran musicians who helped “The Shoals” earn widespread acclaim as a hotbed for musical talent.

The album, Whyde’s third full-length release, includes rollicking melodies and mournful ballads showcasing his vocal range. On autobiographical tracks like “Self-Medicated” and “Ain’t I A Man,” his lyrics focus on some of the more challenging moments of his life including the death of his father, a friend’s struggle with addiction, and the uncertainty of his early career.

When his father was killed by a drunk driver, music was Whyde’s saving grace as a teen. Discovering aural poets like Bob Dylan soon introduced Whyde to a new world beyond the confining conventions of Midwestern youth. He picked up a guitar and never looked back. 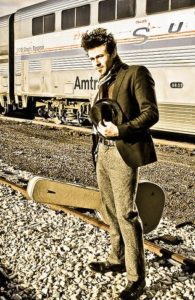 Whyde, now 31, was just 19 when he left college (and a full-ride scholarship) to pursue a career as a singer-songwriter. He moved from Indianapolis to a place where he could immerse himself in musical culture: Nashville, Tenn.

In 2009, he launched his first U.S. tour, and landed a residency at Rockwood Music Hall in New York City. In nearly eight years touring as a solo artist, he has opened for Dwight Yoakam, Sturgill Simpson, Lady Antebellum, and Nathaniel Rateliff among many others. He also sang at Emmy Award-winning actress Katherine Heigl’s wedding.

Whyde is currently on tour in support of Silver Apples of the Moon, which was released on September 19, 2017.  When he’s not touring, he focuses on songwriting and has co-written songs with Grammy-winning country songwriter Clint Lagerberg and modern Americana music stars Jamie Kenney, Tony Lucca, and Stone Aielli.

“I mainly draw on past experiences,” Whyde says of his muses. “I’m moved more by the motors of people and telling a story that perhaps can be healing for another person.”

Listening to his latest album, one gets the sense that Whyde has arrived at a level of peace and comfort as an artist – and in his life overall – that he’s been striving for.

General admission tickets ($15, plus applicable fees) are on sale now at www.hifiindy.com, www.ticketfly.com, or at the HI-FI box office on event nights. Show is 21+ only.