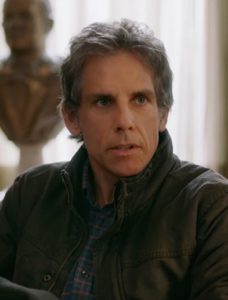 Ben Stiller can be hilarious.  He can also be downright annoying.  While certainly not as grating or whiny as that of Woody Allen, Stiller’s sad-sack down-on-his-luck routine has a tendency to wear thin – particularly when he’s working with a broadly-written script.  I prefer Stiller’s smarter characters – such as those he played in David O. Russell’s 1996 dark comedy “Flirting with Disaster” or in Jake Kasdan’s 1998 comedy-drama “Zero Effect.”  Stiller’s recent work has underwhelmed me.

Until now.  In perhaps the best performance of his career, Stiller gives a thoughtful, low-key performance in Mike White’s new feature “Brad’s Status.”  Brad (Stiller) is a married 47-year-old father of a musical-prodigy son in the process of choosing a college.  While his wife Melanie (Jenna Fischer) is away at a work conference, Brad and his son Troy (Austin Abrams) venture to New England to check out Harvard, Yale, and Tufts.

Thinking about college has caused Brad to take stock of his own life – a mental mid-life crisis, if you will – as he compares his success with those of his college friends.  As the head of a non-profit with a working, white-collar wife, Brad leads a comfortable life.  He’s not filthy rich by any stretch, but he owns a substantial home in Sacramento, so he can’t be doing that badly.  But one of his friends sold his tech company, retired young, and moved to Hawaii.  Another is a successful motion picture director.  A third is a wealthy hedge-fund manager.  And Craig (Michael Sheen) is a political pundit and published author who just so happens to have a connection at Harvard.

But Brad is embarrassed to ask Craig for help.  He’s ashamed the way his life stacks up less favorably than those of his friends.  Oh, if we could all be so lucky as to have Brad’s life.  And his friends.

Now before you assume “Brad’s Status” is nothing more than an exercise in watching Ben Stiller wallow in self-pity, be advised that we experience Brad’s thoughts through voice-over narration only.  As a father and husband, Brad seems pretty normal.  A bit introspective (His wife tells him to “Be present” as he and Troy leave for New England.), but not the embarrassing character Stiller is often wont to play.

And White (who also wrote the screenplay) never interjects any humiliating scenes for Stiller to “showcase” the over-the-top buffoonery for which he is known.  No, “Brad’s Status” plays everything in a somewhat laid-back fashion – and boy is that refreshing.  Working under tight reins, I’ve never been more impressed with Stiller’s acting chops as I am here.  He comes across as a genuinely concerned and protective parent who happens to be analyzing his place in the game of life.  It’s a nuanced and refined performance.

Austin Abrams (from “The Walking Dead”) is equally as convincing as Troy.  Unlike in so many Hollywood films, this teenager actually seems like a teenager – rather than a twentysomething actor who spouts disrespectful diatribes to his parents.  Yes, Troy would rather listen to his iPod than his father, but when Brad has something to say, he’ll courteously remove his headphones and engage in meaningful conversation.  Sometimes Troy seems like the more level-headed character, although Abrams lets us know Troy is a little nervous about finding the right post-secondary education fit.

Of the supporting actors, I was especially impressed with Michael Sheen’s Craig, who doesn’t turn out to be anything like the self-centered monster Brad fears he’s become.  Over the course of their dinner in Boston, Craig updates Brad on the situations of their other college friends – and the old cliché that money can’t buy happiness hits Brad hard. 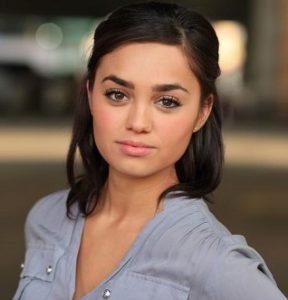 Newcomer Shazi Raja is excellent as Ananya – a fellow musician and former classmate of Troy’s currently studying at Harvard.  Ananya’s youthful idealism reminds Brad of his own, and he seizes the opportunity to open up to her about his midlife crisis.  Her response is exactly what Brad needs to hear.  And fortunately, White’s script does not include any kind of sexual tryst between Ananya and either Troy or Brad.

I was particularly fond of the ending.  Unlike in most Hollywood fare, the loose ends are not tied up in a neat little bow.  Brad’s demons are never fully exorcised, and Troy’s college plans are still forming.  But we don’t need to know exactly how the subplots play out.  Instead, we’re left to ponder whether a certain amount of rose-colored optimism isn’t vital to a mentally healthy existence.  It’s an appealing premise.  And a very good film.