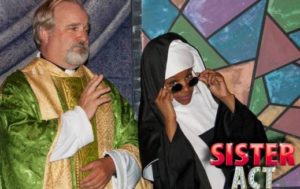 Sister Act tells the hilarious story of Deloris Van Cartier, a 1970’s era disco diva whose life takes a surprising turn when she witnesses a murder. Under the protective custody of the Philadelphia Police Department, she is hidden in the one place she won’t be found – Queen of Angels Parrish in a Convent.  Disguised as a nun and under the suspicious watch of Mother Superior, Deloris helps her fellow sisters find their voices as she unexpectedly rediscovers her own. A wonderful tribute to the universal power of friendship,  sisterhood and music.

Authored by Alan Menken and Glenn Slater, this musical is the stage version of the popular film and sequel starring Whoopi Goldberg.
Footlite Musicals tells us that in keeping with the theme of the show, they will take special intermission collections and pass the offering plates to benefit The Little Sisters of the Poor and The Julian Center.

Spread the LOVE around!