Darren Aronofsky’s “mother!” is one of the most innovative and original visions ever put on film.  It also happens to be one of the least entertaining pictures I’ve ever seen. 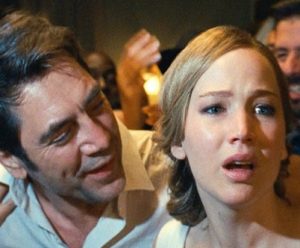 Alone in an isolated “fixer-upper” mansion, an unnamed husband and wife (Javier Bardem and Jennifer Lawrence) appear to be living a comfortable life.  However, we know right away that Aronofsky’s original screenplay is not based in reality, as the wife (or “mother”) can see and feel a heartbeat by touching the walls of their home.

Bardem’s character is a poet experiencing a case of writer’s block, when a mysterious (and again unnamed) doctor (Ed Harris) comes to visit.  It’s unclear whether he is aware this is the writer’s house, but once he proclaims himself a big fan, the writer begs his company for as long as he requires shelter.  The next day the man’s wife (Michelle Pfeiffer, in a perfect bit of casting) arrives.  While she attempts to befriend Mother, she turns out to be the houseguest from hell – breaking things and prying too deeply into the lives of a couple she’s only just met.

The strange couple’s two sons (Domhnall and Brian Gleeson) arrive later to complain to the Harris character about his will.  One brother inadvertently kills the other, and soon the writer and his wife have a houseful of unwanted guests who use the isolated mansion for a wake.  Unnecessary pushy and rude, the guests are eventually dismissed by Mother.  Following a brief marital spat, the writer and his wife make love (for the only time in “mother!”) and promptly create a pregnancy – which unlocks the aforementioned writer’s block.

Bardem’s character releases his long-awaited collection of poetry just as Mother is about to conceive.  What happens next must be seen to be believed.  I never want to reveal too much in a review, but as Aronofsky’s screenplay begs our interpretation, I must.  A throng of fans and media show up to ask questions of the now-famous writer.  Proving even more unruly than the previous horde of uninvited sojourners, this exponentially expanding multitude proceeds to destroy the dwelling Mother so loves.  After she gives birth, they demand to see the baby and (spoiler alert) promptly proceed to cause its demise.

What does it mean?

This is one of those allegorical films that takes more time to pore over than it does to actually view.  Jennifer Lawrence herself maintains that her Mother character represents Mother Earth, Bardem’s writer is God, and the uninvited guests depict the rape of earth by its inhabitants.  I’m not sure I agree with that interpretation, although I’ll agree with Lawrence that if we make the mental leap to consider Bardem’s narcissistic writer a representation of God, it logically follows that Ed Harris and Michelle Pfeiffer are Adam and Eve, and their sons are Cain and Abel.

But let’s take the metaphor a step further.  While we all know God does not exist in human form, per se, the only time He figuratively “made love” would have been to impregnate the virgin Mary with our Lord and savior.  That makes Lawrence’s character the mother of Jesus, from whence the film’s title takes its name.  If the assembled multitude represents all of us, a case could be made that we can’t seem to get enough of God, and that He is all too eager to accommodate our every wish to the best of his ability.  Sure enough, Bardem’s character can’t seem to “just say no” to any houseguests.  And while Mother wants to cradle her newborn, the writer overrules her to share the baby with the unruly throng, who eventually suffocate the life out of him – while taking communion at the dining room table upon which his dead body lay.

The opening and closing sequences – which depict, among other visuals, Mother rising directly from her bedsheets onto her bed – are reminiscent of Ingmar Bergman’s “Persona,” which was also heavy on religious symbolism.  But unlike “Persona,” “mother!” is a difficult film to watch.

Initially shot in close-up, we only see the interior of the mansion as the camera follows Mother around the house – much the way Jack Nicholson was filmed in “Chinatown.”  The camera backs out a little during the crowd scenes, but they still have an intentionally claustrophobic and caustic feel.  The house (beloved by Mother) actually bleeds, and an aggressively expanding amount of blood is shed by the houseguests. 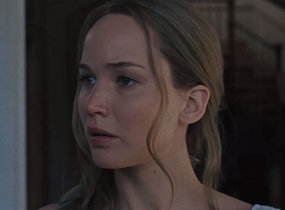 The bottom line here is whether or not “mother!” should be considered a masterpiece.  I do not believe so, although Jennifer Lawrence continues to claim her place as one of our greatest young actresses.  Her performance is nuanced yet frightening – in the way Mia Farrow’s was in the similar “Rosemary’s Baby.”

Is it a masterpiece?

For those unfamiliar with Biblical literature, “mother!” is likely to seem like an unnecessarily gory story about essentially nothing.  I personally equate it to Stanley Kubrick’s “A Clockwork Orange,” which is equally difficult to watch, but I like to see it every opportunity I can.  By contrast, I don’t care if I ever see “mother!” again.  It’s an emotionally and visually draining two hours which does not easily invite a second viewing.  I would enjoy discussing it with anyone; just don’t make me sit through it again.