It’s hard to choose the best animated Disney feature film of all time.  Is it Snow White and the Seven Dwarfs?  Pinocchio?  Bambi?  I’ve always been partial to Dumbo.  Or is it one of the newer group?  Beauty and the Beast or The Little Mermaid perhaps?  Ask ten people and you’re likely to get ten different responses.

But ask them to choose the best live-action Disney feature, and one name always surfaces:  Mary Poppins.  This film is as close to perfect as any ever churned out by the Disney studio, and (with last week’s North by Northwest) is one of the two best films to show this entire season at the Historic Artcraft Theatre in downtown Franklin.

For those unfamiliar with the concept, Walt Disney himself persuaded British author P.L. Travers to let him adapt her magical nanny to the big screen.  Although Travers demanded final approval over the screenplay, she was still disappointed in the outcome (which is why the stage version never materialized during her lifetime).  Travers disliked the sweetness Disney brought to her strict and often cranky character.  On the other hand, Disney’s job was to make a successful family film – so he had to soften the role to a certain degree.

Travers’ criticism aside, Disney’s Mary Poppins became a classic practically the day of its release.  Starring Broadway sensation Julie Andrews as the iconic early 20th century governess, the young Banks children are quickly taken by their new au pair whose mere presence seems to result in enchanting adventures.  Ruled by a rigid and mundane father (veteran British actor David Tomlinson) and a mother busy fighting for women to have the right to vote (Glynis Johns), young Jane and Michael Banks have never bothered to notice the everyday working men and women whose lives are often full of excitement. 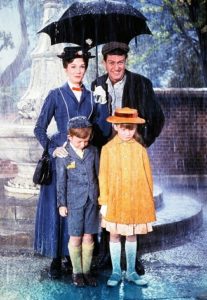 Mary Poppins brings the children to a city street to watch the work of her friend Bert, a chalk artist and one-man-band street performer played by a young Dick Van Dyke.  Mary manages to somehow place the four of them inside the drawing, where they proceed to spend a day in the captivating world Bert has created on the sidewalk.  Mary and Bert sing and dance, and the children play on a carousel with animated animals, including a group of too-cute penguin waiters who serve them tea.

Another day, they visit Mary’s Uncle Albert (Ed Wynn) who treats her and the children to a tea party – on the ceiling!

Later, after Bert has found work as a chimney sweep, the four charlatans mysteriously float up a chimney to the city rooftops where Bert and his fellow sweeps perform a dance number to rival anything with which Gene Kelly ever graced the screen.  Van Dyke was in his prime as a dancer, and the chimneytop sequence never ceases to astonish me.

As the children become happier and filled with a sense of playfulness previously missing from their lives, Mr. Banks becomes grouchier – as though he prefers them to be out of sight, out of mind.  The final showdown with his boss at the bank (also Dick Van Dyke) is one of the most enjoyable in cinema history.  When Mary’s time with the Banks family draws to a close, she leaves behind a cheerier, more well-balanced family.

Why is Mary Poppins such a classic?  First and foremost, the character itself is fetching.  Mary always maintains the stiff upper lip Mr. Banks requires, and seems oblivious to her own magical powers.  But this is exactly what endears the children to her, and inadvertently forces them to use their own imaginations.

And Disney’s casting of Julie Andrews in the title role was the proverbial icing on the cake.  Andrews has had a career of memorable performances, but none as engaging as her first film role.  The irony is that she was passed over for the role of Eliza Doolittle in the motion picture adaptation My Fair Lady – the Broadway show that had made Andrews a star in the 1950s.  While My Fair Lady won the Best Picture Oscar for 1964, Andrews won Best Actress over Audrey Hepburn, who had “replaced” her in My Fair Lady. 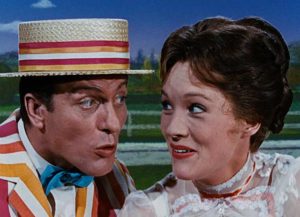 Often criticized for his British accent in Mary Poppins, I found Dick Van Dyke to be exactly the right person for the role of Bert.  It’s his best film role, and he and Andrews had such a winning on-screen chemistry, it’s a shame they never worked together again.

It’s hard to discuss Mary Poppins without mentioning the Richard and Robert Sherman score.  Much as in Fiddler on the Roof, almost every song has become a classic – from the Oscar-winning “Chim Chim Cher-ee” to “A Spoonful of Sugar,” “Step in Time,” “Supercalifragilisticexpialidocious,” “Feed the Birds,” “Let’s Go Fly a Kite,” and “I Love to Laugh,” these are the songs of everyone’s youth.  Since 1964, there has not been a generation grow up without knowing (and often memorizing) these timeless tunes.

Made for big screen

Mary Poppins also succeeds if for no other reason than it was not previously a Broadway production.  As with Singin’ in the Rain, the best motion picture musicals are typically those imagined for the big screen – taking advantage of many locations (often outdoors), and movie trickery like the tea party on the ceiling, or Donald O’Connor’s dancing on the walls in Singin’ in the Rain.  Yes, Mary Poppins was eventually produced as a Broadway musical, but the magic of Mary floating through the air on a sunny afternoon with her parasol held high can only truly happen in the movies.  By contrast, sometimes film adaptations of stage musicals often look like nothing more than film adaptations of stage musicals.

While most of us have seen Mary Poppins on one video form or another over the years, this is one that invites us to see it on the big screen as it was intended.  Fortunately, we have a chance to do just that this Friday and Saturday, September 15th and 16th, at the Historic Artcraft Theatre in Franklin.  And if you’ve never had the pleasure of watching Mary Poppins, your life is about to change for the better, my friends.