Stephen King novels have always been difficult to adapt to the big screen because so much of the terror evolves from inside the minds of his characters.  Consequently, directors typically resort to personifying these visions via special effects, which give life to thoughts that (in real life) remain lodged in our brains.  The results are often less than stellar because we see figments of our imaginations brought to life – in other words, something imaginary is inserted into what is supposed to be reality. 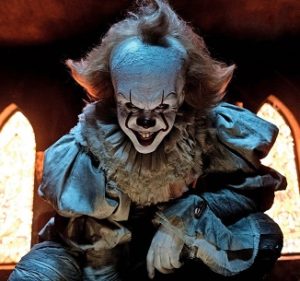 Never has this criticism manifested itself more vividly than in Andy Muschietti’s new adaptation of King’s 1986 novel “It” – a story about a group of young teens who each see a common vision of a terrifying clown.  Unfortunately, any motion picture depiction of a scary clown can’t possibly be as terrifying as that which exists in the minds of the kids.  Instead, we are once again treated to what could be a fascinating coming-of-age story which devolves into a macabre rush of special effects.

Wisely resetting the story from the 1950s to 1989, screenwriters Chase Palmer, Cary Fukunaga, and Gary Dauberman have otherwise remained true to the spirit of King’s original work.  “It” tells the story of six boys and a girl who spend their summer receiving terrifying visions, investigating their source, and then going after the clown – although, as in zombie films, how does one kill something that’s already dead? 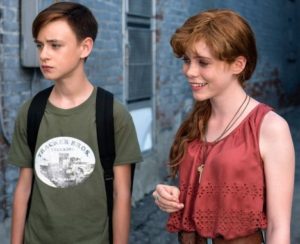 These students are all smart and apply deductive reasoning to their horrifyingly vivid plight.  There’s really no reason for the group’s moniker, save for the fact that the town bully (a mullet-wearing hothead named Henry, played by Nicholas Hamilton) and his two goons spend their summer terrorizing them.  It’s the bullies who have bestowed the group’s nickname.

The young actors are all outstanding, and Lieberher and Lillis could have lasting careers.  The banter amongst the group members is sharp and witty, and their individual quirks and mannerisms are well-drawn.  Their backstories are each given enough weight for us to understand their personalities and school reputations – even that of the bully.

Comparison to “Stand by Me”

I vividly remember my favorite adaptation of a King novel – Rob Reiner’s 1986 classic “Stand by Me,” which made stars out of young River Phoenix and Corey Feldman.  “It” has the potential to do the same.  However, “Stand by Me” was a coming-of-age story, not a horror film.  Its tension derived directly from the narrative, and whatever inner fears the “Stand by Me” boys felt was verbalized rather than conceptualized by Reiner.  “Stand by Me” is a masterpiece; “It” is a swing and a miss.

My biggest complaint with the screenplay (and King is at fault here) is that none of these otherwise intelligent kids bothers to notify the authorities (parents, teachers, police) of any of these powerful clown appearances, which they describe as “real,” not imaginary.  At the very least, a smattering of adults could have assessed the situation and shrugged off the boys’ concerns.

And I realize we leave some of our beliefs outside the theatre when we watch a horror movie, but would there really be a big, creepy, abandoned house in this town that no authorities have ever taken the time to condemn and/or remove?  And the elaborate sewer system is a little much for a typical New England town, but I digress.

My feeling is that most Stephen King novels should not be made into major motion pictures.  Consider this comparison:  Rob Reiner’s 1990 adaptation of “Misery” featured a mentally unstable woman living alone in a small house in the Rocky Mountains who rescues a man following an auto accident.  He turns out to be her favorite author, so she does anything she can to ensure he remains in her house forever.  Farfetched?  Sure, but realistic?  Yes, it could happen.

In “It,” a scary clown terrorizes children (and even kills a few) every 27 years.  Farfetched?  Yes, but not realistic either!  The entire impetus for the plot doesn’t fit within the reality established at the outset.  We are to believe these boys (and girl) exist in the real world, yet the characters spend their time tracking down an imaginary clown.  Why not a story about how the kids stand up to the bully?  Or track down a robber or murderer?  The kids (who are all fascinating characters) exist in the real world, so let’s give them a real-world story!  (Having said that, I do wonder what David Lynch could have done with this source material.)

Leave it on the page

I’m not blaming King.  His story is a novel.  A book.  Most books do not acclimate well to the big screen.  And Reiner has already immortalized the two most adaptable of King’s works.  My issue is with Muschietti’s attempt to bring this story to the big screen in the first place.  I wish he had simply left “It” in the libraries and bookstores where it belongs.