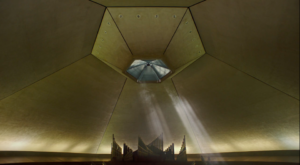 Most of us have at least been to or through Columbus, Indiana.  But we likely never stopped to marvel at the world-class 20th Century architecture.  Columbus is considered one of the three or four architecture capitols of America.  Some travel from all over the world to take one or more of Columbus’ architecture tours.  Now first-time director Kogonada (a visual arts writer and essayist with his own Vimeo page) has graced us with “Columbus,” a celebration of the “Architecture Capitol of the Midwest,” in which the functional constructs are used as a backdrop for a low-key yet surprisingly intense story of relationships and loss. 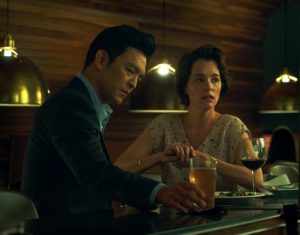 John Cho (from the “American Pie” films) plays Jin, a middle-aged Korean man who travels to Columbus when his architect father lapses into a coma while in town to give a lecture.  Not only is Jin not particularly close to his father, but the Kogonada screenplay implies that the two are estranged.  Still, Korean custom calls for Jin to care for his elders, and so he and his father’s personal assistant (played by Parker Posey) find themselves spending time in this architectural mecca. 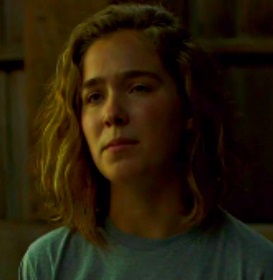 While promenading the grounds of the inn (more like a bed and breakfast, only without the breakfast), Jin meets Casey (a career-making performance by Haley Lu Richardson) – a recent high school graduate who’s decided to put off college, perhaps indefinitely.  Casey is wise beyond her years, and has an intellectual relationship with Gabe (Rory Culkin), a doctoral student who works with Casey at the Cleo Rogers Memorial Library – one of the architectural jewels of Columbus.  While Casey and Gabe aren’t actually dating, he’s the closest thing to a boyfriend in her life.

Jin and Casey discover a mutual love of architecture, and they proceed to spend a lot of time together.  Now you’d think Jin would spend most of his days in the hospital at his father’s bedside.  But remember, the two are estranged, and Jin doesn’t even want to be in Columbus in the first place.  As Casey flaunts the city’s architectural gems, the two learn a lot about each other.  Even at the outset, their relationship is different from almost any we see in the movies.  For example, as Casey is reeling off interesting facts about a building in front of which they stand, Jin interrupts and begs her to tell him how the building makes her feel.  To these characters, that’s more important than factual information – although Casey knows more about Columbus than any of the architectural tour guides.

Casey’s mother (Michelle Forbes) works (often night-shift hours) at one of the local factories.  A recovering meth addict, she is dependent upon Casey for transportation, meals, and other daily-living elements of her life.  She is the reason Casey has chosen to stay home rather than attend college.  Interestingly, Casey values the importance of her care more than its actual worth.

How fascinating that these two wildly divergent characters find one another in the first place.  Jin is almost old enough to be Casey’s father.  His home is half a world away from hers.  And most striking, family is far less important to Jin than to Casey.  As the two become fast friends (and, fortunately, not lovers), they learn important lessons about themselves.  Jin begins to question his distant relationship with his father, while Casey begins to consider leaving her mother for her educational dreams.  There’s a lot of action going on in the concise screenplay, even if there isn’t much action.

Richardson’s Casey is one of the most engrossing film characters I’ve seen this year.  She’s the type to answer a question with another question.  She’s the type who seems to hear what others are thinking – through their words and through their facial expressions.  Other characters can’t have a “simple” conversation with Casey; she doesn’t do “simple.”  Haley Lu Richardson is the actress who played Hailee Steinfeld’s best friend in last year’s “Edge of Seventeen,” and here she confidently carries a film for the first time. 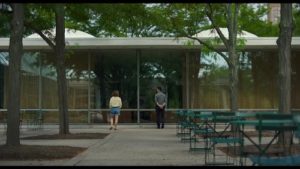 I also want to acknowledge Elisha Christian’s marvelous cinematography.  Six years ago, I wrote that the state of Hawaii was so intricate to the story that it was practically a character in and of itself in Alexander Payne’s “The Descendants.”  The same is true here of the city of Columbus.  The architecture is practically its own character.  Each shot is exquisitely established.  As we marvel at the interior or exterior of the building on the screen, the characters move around within like the pieces of a chess board.  When we play chess, we’re required to see the entire board, as opposed to each individual piece.  Same here.  Kogonada and Christian force us to see the building in question – not the individual characters.  Christian’s camera serenades the banks, schools, and churches, and requires us to do likewise.

And in that paradox lies the beauty of “Columbus.”  While the characters are engrossed in the intricacies of their innermost feelings, we see the proverbial big picture of their surroundings.  That Casey and Jin love the architectural landscapes runs counter to their discussions of each other’s perceptions and sensitivities.  They are kindred spirits yearning to break free of the current structures of their lives.  While perhaps too serene for some, I found “Columbus” to be one of the best and most unique pictures so far this year.