Sundance darling “Patti Cake$” is everything you think it is:  inspiring, moving, raw, and utterly predictable.  Breakout star Danielle Macdonald (who is actually Australian) plays Patti “Dumbo” Dombrowski, a 23-year-old rapper wannabe living in a New Jersey slum not far from Manhattan (at least geographically).  As her life crumbles around her, Patti realizes her only chance to break free from the hopelessness of her existence is through her rapping talent.  If this sounds like the rap version of “Rocky,” you’re absolutely correct.

Patti lives with her mother Barb (comedienne and cabaret singer Bridget Everett), a former almost-famous frontwoman for a 1980s big-hair rock band.  Barb reminds me of the stereotype high school football star who reaches middle age and realizes his life peaked in high school.  Barb’s life peaked during her practically-notable rockband years, and it’s been stuck in a downhill spiral ever since.  Now she gets drunk and sings karaoke at the local watering hole where Patti tends bar.  The way Patti and Barb trade insults with one another you’d think they were mortal enemies.  But they’ve had a rough life, so the Geremy Jasper screenplay excuses their behavior.  And oh yes, in case you weren’t sure, the house is a mess.

Also living with the Dombrowski’s is Barb’s mother – known only as Nana – a chain-smoking crank who wastes her life watching daytime television.  In her meatiest role in years, Cathy Moriarty shines as Nana, whose love for Patti is more obvious than that of Barb’s.  In the film’s funniest sequence, it’s Nana who coins the group’s name, and whose voice becomes the lay-down track for their first recording. 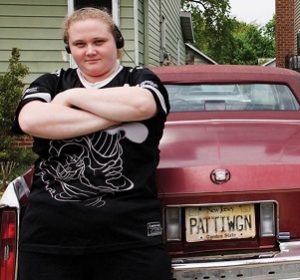 Patti’s life seems to take a turn for the better when she’s hired for a daytime job with a catering firm, and she and her rapping/singing partner Jheri (newcomer Siddharth Dhananjay) find a brilliant but very soft-spoken producer known only as Basterd (Mamoudou Athie) living in a shack in the middle of the woods.  Not believable, but Basterd rivals Nana as the funniest character in the entire movie.

As you might expect though, Patti’s world again begins to crumble.  She’s required to juggle a lot of proverbial balls in her life, and certain events are simply out of her control.  When she makes a few bad decisions, the outlook is bleak.  I expected a savior to appear out of nowhere to show young Patti how many lives she’s touched, a la George Bailey’s guardian angel in “It’s a Wonderful Life.”  What finally ensues isn’t that dramatic, but I just knew things would all work out in the end.

There’s nothing subtle about “Patti Cake$.”  In fact, toward the end I found myself thinking, “If they put up one more obstacle to her success, I’m going to scream!”  They did.  Fortunately, I did not.  First-time director and screenwriter Geremy Jasper throws in everything including the kitchen sink.  The Dombrowskis are behind on their bills; Nana’s hospital bills lead to more financial hardship; Barb is essentially worthless; Patti can’t keep a job; she has difficulty keeping her band together.  You get the idea.

And Jasper’s camera continues to focus on a long shot of the Manhattan skyscrapers in the distance – as if to highlight a world Patti wants but (so far) has been unable to achieve.  This technique is particularly unsubtle once, let alone three or four times.  (I lost count.)

Eventually, the family’s future rests on Patti’s broad shoulders as she, Jheri, and Basterd perform at a regional North Jersey talent contest.  All the loose ends of the story are conveniently tied up within their nifty little four-minute performance.  Remember how Rocky’s entire existence rested on his shoulders as he fought Apollo Creed?  Same here.

And that’s a shame.  I would have liked to have seen a few surprises.  Jasper’s screenplay didn’t give me any.  I liked a lot about “Patti Cake$,” and I found myself rooting for Patti.  But not enough to see it again.