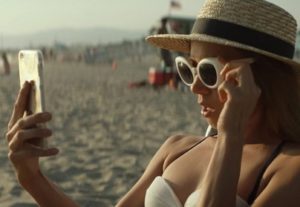 “Ingrid Goes West” is a Sundance favorite that suffers from a bit of mismarketing.  It’s been promoted as a light comedy about Instagram obsession, but it’s actually a heavy dark comedy about mental instability and the desire to belong.  Actress-comedienne Aubrey Plaza produced and stars as Ingrid, a loner who makes connections on Instagram and then mistakenly believes she is friends with the other individuals.  Before the opening credits have finished rolling, we see Ingrid crash the wedding of a girl she barely knows.  She then spends some time in a mental institution.

So before “Ingrid Goes West” even kicks into high gear, we know we’re dealing with an obsessive outsider whose poor decision-making could be dangerous.  What follows is 90 minutes of some of the best movie-making this year.  Aubrey Plaza is so good as Ingrid we find ourselves rooting for her even though we know her actions are morally reprehensible.

Ingrid uses the inheritance from her mother’s premature death to move to Los Angeles and stalk an Instagram queen named Taylor Sloane (another fine performance by Elizabeth Olsen).  Taylor claims she’s a photographer, although we never actually see her photograph anything (other than with her phone).  Her life would appear to revolve around sharing her eternally sunny posts with her legion of followers.  Precariously desiring a piece of this buoyant lifestyle, Ingrid kidnaps Taylor’s dog, only to play the hero upon its return. 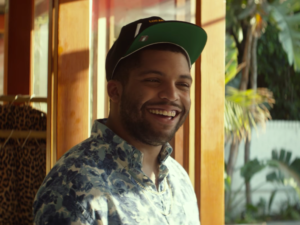 Refusing a monetary reward, Taylor and her starving-artist husband Ezra (Wyatt Russell) invite Ingrid to stay for dinner.  The two women hit it off instantly, and Ingrid seems to finally possess the lifestyle for which she so perilously longs.  The next day, Ingrid, Taylor, and Ezra joyride to the Joshua Tree National Monument, borrowing a truck belonging to Ingrid’s landlord Dan – a wannabe screenwriter and Batman fanatic, impeccably played by O’Shea Jackson Jr., the young actor who played his real-life father Ice Cube in last year’s “Straight Outta Compton.”  Also making a strong showing is Billy Magnussen as Taylor’s obnoxious and socially unacceptable brother.

As we know, hanging out at the same parties, with the same group of equally shallow friends is no basis for a life – either for Ingrid or for Taylor.  But while Taylor’s life is certainly hollow, she’s at least mentally stable.  Ingrid is so obsessed with Taylor she uses her phone to photograph Taylor’s brands of toiletries so she can buy the exact same for herself.  This is obviously not healthy, and we know it can’t possibly last.  Eventually Ingrid’s fanatical behavior is bound to be exposed.  Isn’t it?

The ensuing action takes us in several directions, none of which we see coming.  The utter originality is a tribute to co-writers Matt Spicer and David Branson Smith.  (Spicer also directed.)  This is the most uniquely gripping story I’ve seen since last spring’s “Colossal.”  Its star-worship warning is as biting and pointed as that of Martin Scorsese’s “The King of Comedy.”

Aubrey Plaza absolutely nails the part of Ingrid.  Although an introvert, she’s deftly observed the “in crowd” so long she can easily slip into the role of a highflying member of the jet-set at the drop of a hat.  She’s selfish, compulsive, and downright horrifying.  We can’t fathom the lengths to which she will go to satisfy her narcissistic need to belong.  Plaza deserves a Best Actress nomination for this career-defining performance.

I do have a slight (and only slight) qualm with the ending.  First-time director Matt Spicer sees fit to tack on a mildly happy ending, when I believe the point could have been better made by allowing the action to end on a down note.  What they’ve done is ensured that viewers will leave the theatre with a sense of hope.  Martin Scorsese would not have found such an epilogue necessary.

In deference to screenwriters Spicer and Smith, I loved the fact that the one true friend Ingrid makes in her West Coast foray is the one person she’s not trying to impress.  To avoid a spoiler, I shall leave my commentary at that.

“Ingrid Goes West” is one of the most innovative and exceptional motion pictures I’ve seen this year.  It’s a rare treat to watch a film that respects my intelligence and always stays one step ahead of me.  This is such a movie, and I can’t wait to see it again.