David Mackenzie’s “Hell or High Water” was the surprise hit motion picture of last fall.  Taylor Sheridan’s original screenplay followed two desperate brothers facing financial doom as the 21st century oil glut permeated West Texas.  Turning to bank robbery, the young men were pursued by two Texas Rangers.  The result was two hours of the most captivating filmmaking of the year.  Along with many other critics, I had “Hell or High Water” at #1 on my list of the best pictures of 2016. 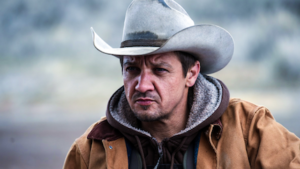 Now Sheridan has returned with another remarkable screenplay, and this time he directs as well.  Why?  According to Sheridan, he didn’t think anybody else could tell this story as well.  Transporting us into another stark Western landscape, “Wind River“tells the story of a murder investigation on the asperous Wind River Indian Reservation in Wyoming during the dead of winter.  Jeremy Renner, so convincing as New Jersey’s governor in his supporting role in David O. Russell’s 2013 masterpiece “American Hustle,” turns in the best performance so far in his career as Cory Lambert, a tracker for the U.S. Fish and Wildlife Service – a man who’s spent his entire life amongst the indigenous, and who feels a certain kinship with them.

Upon a routine check of a remote area of the reservation, Cory stumbles across a recently raped and murdered female body in the snow.  Since the body is discovered on federal land, the FBI is called in.  The young investigator is a Florida native (to accentuate the fact that she is a proverbial fish out of water) named Jane Banner, played by the always convincing Elizabeth Olsen.  Following the initial establishment of the narrative, in which Cory educates Jane on the art of tracking, we believe we know where this story is going – a feeling I never had with “Hell or High Water.”

Fortunately, the feeling doesn’t last long.  Jane proves herself to be much tougher than originally presented, and Cory’s backstory turns out to be fascinating.  As Cory comforts the grieving father (Gil Birmingham from “Hell or High Water”), we learn that he too lost a daughter three years earlier under equally mysterious circumstances.  Cory still maintains a close relationship with his son, even though he and his ex-wife (a Native American) have since separated.

The investigation leads Cory, Jane, and Ben (the reservation’s lone law enforcement officer, played by Graham Greene) to an oil rig operation, shut down for the winter.  The rig workers live on-site in a couple trailers, even during the offseason.  One of the workers had been dating the deceased girl, and he becomes a suspect – although once we meet the crew, we realize any of them could have been capable of committing this crime.  These are hardened real men, who put in long hours during the summer and simply survive during the harsh winter months, never having contact with females.  Like those of the indigenous, theirs is a lonely existence, reconciled with alcohol and occasional bursts of pent-up energy.

While the ensuing shootout is harrowing, there is simply too much firepower for such a confrontation.  Why would rig workers need semi-automatic weapons, and why would the authorities have brought high-powered rifles to such an innocuous setting – even if they believed the murderer to be present?  This shouldn’t be SWAT team material, but Sheridan treats it as such.  Perhaps the military-grade gunfire is supposed to accentuate the grim survival of the inhabitants of this land, but I found it unnecessary.

I did, however, love the fact that the professional relationship between Cory and Jane becomes a working friendship and nothing more.  Although Cory is divorced, any romantic entanglement would have seemed forced.

What makes “Wind River” rise above every other film I’ve seen so far this year is that it harbors a deeper level of understanding than merely a murder mystery.  In “Hell or High Water,” the impetus for the entire story was the fact that the saturation of the West Texas oil market caused the economy to tank – which led to the bank robberies, which led to the investigation, and so forth.  Here, the mere plight of the Native Americans is the catalyst for the entire story.  The fact that the U.S. government has spent the better part of its existence pushing its indigenous residents into increasingly remote and harsh territory sets the screenplay in motion.  If the oil rigs in question were not located on federally protected land, would the resulting escalation of the sheer number of inhabitants have mitigated the rape and murder in the first place?  And if so, where should the natives live?  Sheridan’s screenplay begs a lot of questions, and leaves us to ponder them long after the credits have rolled.

Best so far this year

This is one you won’t soon forget.  Aside from the severity of the final confrontation, “Wind River” succeeds on many levels.  It’s not as strong (nor as funny) as “Hell or High Water,” but it instantly gravitates to the top of my list of the year’s best pictures.  Will I see anything I like as well during the second half of 2017?  I might, but I wouldn’t be surprised if I don’t.

For all intents and purposes, Taylor Sheridan has become the Coen Brothers of the new millennium – although his stories are more profound and less quirky than those of the Coens.  And given what I’ve seen from the Coens lately, I believe Taylor Sheridan has “stolen their thorny crown” as the best idiosyncratic storyteller of the day.