For the first time in the Indiana Repertory Theatre’s (IRT) 46-year history, patrons will soon be able to enjoy a production while sitting in the comfort of their homes. Special project funding from Lilly Endowment Inc. promises that Finding Home: Indiana at 200 will be broadcast by the end of the year.

Finding Home, one of IRT’s most ambitious artistic endeavors, was a two-part production produced on IRT’s Upperstage in the fall of 2016. It featured 60 mini-plays written by 29 Indiana writers and celebrated Indiana’s Bicentennial. Both productions were woven together by original music created by singer-songwriter Tim Grimm and his family band.

Janet Allen, IRT’s Executive Artistic Director, shares how patrons were eager to take part of this production home with them. 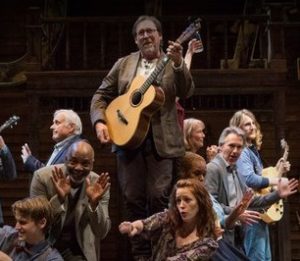 “We received patron comments throughout the run asking–even assuming—that we were going to record this production,” said Allen.  “It’s such a rare event in the life of a producing theatre to be able to redistribute live theatrical work through high-quality production, ensuring that an art piece has continued life for years to come.”

Lilly Endowment‘s funding, along with WFYI’s video production team, will make IRT’s Indiana “love song” accessible beyond the stage. The broadcast, which is set to air in December of 2017, will be available to Central Indiana viewers and additional Indiana markets with a WFYI affiliation.

WFYI’s multi-camera film crew recorded the production while it was onstage last fall. 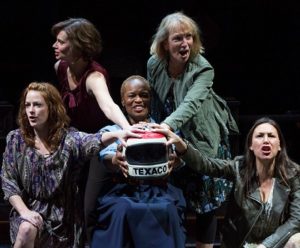 “WFYI is proud to be partnering with the IRT. Finding Home was a fantastic production that did a great job of creatively sharing the highs and lows of Indiana over the last 200 years,” said WFYI President and CEO Lloyd Wright. “It’s a wonderful way to experience how artists reflect on our state’s history, and we hope all Hoosiers will enjoy watching the program on WFYI Public Television.”

The Lilly Endowment grant will support a two-hour broadcast version of the stage production. Funding will enable IRT and WFYI to place one full-length copy into each public library system in the state of Indiana, totaling nearly 450 DVDs. Shorter subject-specific segments will be made available through IRT’s and WFYI’s educator portals, and one Indianapolis-centric DVD will be produced to celebrate Indianapolis’ bicentennial celebration in 2020.

From the endowment’s VP

“The digital version of Finding Home offers a compelling opportunity to honor, celebrate and preserve Indiana’s history,” said Ace Yakey, Lilly Endowment’s vice president of community development. “We are especially pleased that the project will enable libraries across Indiana to share and preserve this IRT production for generations to come.”

The production explores diverse subjects that include Madame C.J. Walker, Ryan White, Native American history, Indianapolis sports, and Kurt Vonnegut. Finding Home shares both the jubilant and challenging stories of Indiana’s history, and this unique partnership will preserve the bicentennial project for generations to come.

“It’s a gift that we are able to take this production from the stage to TV in such an impactful way. Lilly Endowment and WFYI are helping us make this happen and together we’re able to celebrate our community in so many ways,” said Suzanne Sweeney, IRT’s Managing Director