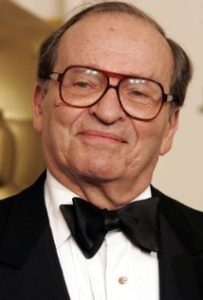 Sidney Lumet was known as an “actor’s director” – meaning actors loved to work with him due to his penchant for giving actors long soliloquys, and shooting them in broad, respectful takes.  As point of contrast, consider the Coen Brothers’ films or the recent Hell or High Water as pictures in which the screenplays are the real stars and the actors take an appropriate back seat to the scripts.

To make my point, consider Lumet’s 1975 classic Dog Day Afternoon.  Can you fathom anybody but Al Pacino in the lead role?  Of course not.  Pacino owns the role, and has Lumet to thank.  Pacino was almost “bigger than the movie.”  The following year, Lumet released the Oscar favorite Network, which featured first-rate performances from the entire cast – even down to those of Ned Beatty and Beatrice Straight, who appeared in exactly one scene apiece, yet I still remember their accomplishments as though I saw them yesterday for the first time.

So it should come as no surprise that Lumet’s first feature film (clear back in 1957) was a big-screen adaptation of Reginald Rose’s teleplay Twelve Angry Men – a courtroom drama of sorts, in which all the action occurs inside the jury room.  Sound boring?  Not a chance.  This relatively low-budget black-and-white non-widescreen commercial flop has since become so revered it is one of the films selected by the Library of Congress for preservation in the National Film Registry. 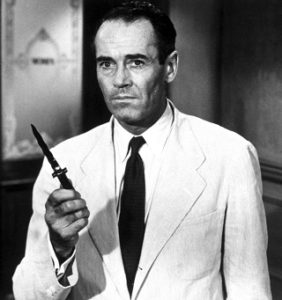 Henry Fonda (who acted for scale because he so believed in the project) plays the lone dissenter in a twelve-man jury assigned to determine the guilt or innocence of a young slum-dweller accused of murdering his own father.  The others either have evening plans, consider the evidence to be damning, or some combination of both.  Fonda (known as Juror #8) reminds the others their duty is to issue a “guilty” verdict only if there exists no “reasonable doubt” that he could be innocent. 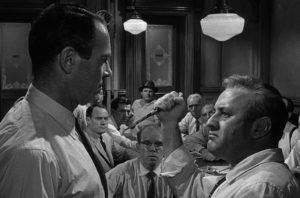 As Fonda dismisses the various pieces of evidence, other jurors begin to change their votes to “not guilty” – or in the case of Juror #12 (a young Robert Webber), back and forth several times.  As you might expect, a certain amount of name-calling and socioeconomic “racism” takes place, with Juror #3 (an Oscar-worthy Lee J. Cobb) accusing Juror #5 (a young Jack Klugman) of sympathizing with the defendant because he too grew up in a slum.

As the conversation progresses, tensions mount, and the outcome of the deliberations is in doubt until the final minutes.  For a motion picture in which all the action takes place in one room, Twelve Angry Men is surprisingly taut, and frequently hair-raising.  Credit screenwriter Reginald Rose, whose original teleplay had aired on CBS’ “Studio One” three years earlier.  Credit Fonda for bringing this project to the big screen.  He served as executive producer as well as star.

But it is perhaps Lumet who deserves more credit than any.  Picture Twelve Angry Men on stage.  The tension would be derived from the actors.  As they pore over the evidence, accusations fly and passionate discourse is exchanged.  The audience would be enraptured.  But put that very same play on film and the audience would be bored.  Live theatre eliminates the proverbial wall separating the actors from their audience.  Lumet must find some other way to heighten the tension as the proceedings ensue.

Think of any Martin Scorsese film.  As a climactic scene develops, his editing becomes quicker.  Scenes are short.  Camera movement is quick.  We feel the tension not merely from the actors, but from Scorsese himself.  That’s exactly how Lumet approaches Twelve Angry Men.  The widest shot in the entire picture is the first, in which we see all twelve jurors enter the deliberation room, take their seats, and begin to discuss the trial.  The camera is positioned above the men.  As the action unfolds, Lumet’s camera shots tighten ever so slightly.  By the end, each (often) angry face of the speaker is filmed in close-up, and from slightly below face level; we haven’t seen an establishing shot since the beginning.

For what is essentially a filmed play, Lumet forces us to feel the heightened emotions of the room via cinematographer Boris Kaufman (who won an Oscar three years earlier for On the Waterfront).  Lumet and Kaufman deftly handle the transition to the big screen.  By the end, we’re practically exhausted.  And that’s by design.

Certain aspects of Twelve Angry Men seem dated.  All the jurors are male, and all the jurors are white.  But the murder and ensuing urgency of the deliberations could occur today.  Fortunately, we have the chance to see this astounding achievement this coming Friday and Saturday at the Historic Artcraft Theatre in downtown Franklin.  Shows are at 2:00 PM and 7:30 PM on Friday and Saturday, August 11th and 12th.