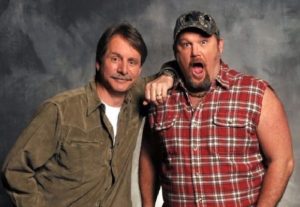 Two of the country’s most renowned comedians, Jeff Foxworthy and Larry The Cable Guy, have teamed up to create RFD TV presents Jeff & Larry’s Backyard BBQ Festival – a brand new comedy and music festival coming to multiple cities this summer, promoted exclusively by Live Nation. The tour will make a stop at Klipsch Music Center in Noblesville, Indiana on Saturday, August 26. With a long history of collaboration, the two have toured together multiple times and even share a stand-up special, We’ve Been Thinking…, which was released this past August and is available on Netflix. Between the two, they have racked up multiple film and TV roles, Grammy nominations, comedy specials, and their own SiriusXM channel (Jeff & Larry’s Comedy Roundup). They’ve also hosted popular television shows, FOX’s Are You Smarter Than a 5th Grader? (Jeff Foxworthy) and the History Channel’s Only in America with Larry The Cable Guy (Larry The Cable Guy).

Jeff Foxworthy says, “Let’s be honest. If we didn’t have music and laughter we’d all go crazy! We’re trying to bring folks a double dose of both in one night. I can’t wait to kick this off and keep my sanity in check! See you there!”

Larry The Cable Guy adds, “If you don’t like this tour you need your American credentials taken away! This is gonna rock! I’m glad to be a part of such a fun event. I might even get to sing! (Only at sound check).”

RFD TV presents Jeff & Larry’s Backyard BBQ Festival will feature the comedy of Jeff Foxworthy and Larry The Cable Guy, along with musical performances by rock acts Eddie Money, The Marshall Tucker Band, Foghat, and more to be announced! Musical acts will vary by city, so check local listings. With a number of platinum records under his belt, Eddie Money is most well-known for his Top 40 hits including, “Shakin,” “Baby Hold On,” “Two Tickets To Paradise,” and “Take Me Home Tonight” which was a Grammy-nominated duet with Ronnie Spector. The Marshall Tucker Band has launched its 45th anniversary tour and continues to perform at sold-out shows across North America, having earned five gold albums and two platinum albums. Foghat formed in 1971 and has earned eight Gold records, one Platinum record and one Double-Platinum record. Their top 20 hit “Slow Ride” was named the 45th “Best Hard Rock” song of all time by VH1 in 2009.

With over six hours of entertainment, Jeff & Larry’s Backyard BBQ Festival will be a full day of fun for the whole family. The concourse will feature a full selection of local barbeque options and a number of festival activities including dunk tanks, backyard games, and more.