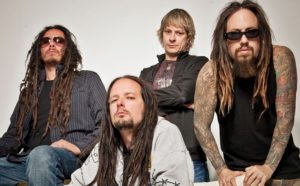 Roadrunner recording legends KORN have announced plans for a truly diverse and epic summer tour, set to get underway June 16th at the USANA Amphitheatre in Salt Lake City, UT and then continue through early August. Presented by Live Nation, The Serenity of Summer tour will feature special guests and fellow Roadrunner recording group Stone Sour on all dates.  The powerfully eclectic tour is rounded out by support by Skillet, Yelawolf and DED, creating a versatile bill reminiscent of KORN’s famed Family Values tours in the past. The tour will make a stop at Klipsch Music Center in Noblesville, Indiana on Saturday, July 29.

KORN’s new studio album, THE SERENITY OF SUFFERING, arrived last October and instantly ascended to #4 on the SoundScan/Billboard 200. The album – which also debuted at #1 on Billboard’s “Top Rock Albums” and “Hard Rock Albums” chart – established KORN as one of an elite number of rock legends to achieve multiple top 10 placements on the chart. With 10 total top 10 albums thus far, KORN’s count is now equal to that of Led Zeppelin.

With career album sales in excess of 40 million, two GRAMMY® Awards, nearly 20 million social media followers, and over two decades of non-stop world tours, KORN stands tall as one of the most iconic and influential bands in the annals of hard rock and beyond. Vocalist Jonathan Davis, guitarists James “Munky” Shaffer and Brian “Head” Welch, and bassist Reginald “Fieldy” Arvizu came together in 1993 and immediately started a metal revolution with their classic 1994 self-titled debut, its 1996 follow-up, the 2x RIAA platinum certified LIFE IS PEACHY, and 1998’s 5x platinum certified, #1 blockbuster FOLLOW THE LEADER.

The years that followed saw KORN battling an array of personal demons but emerging triumphant to even greater popular success and artistic achievement. THE SERENITY OF SUFFERING builds upon the band’s remarkable history with a return to the dual-guitar dynamic that first fueled their music, powered in no small part by drummer Ray Luzier, and some of Davis’ strongest and most reflective songwriting to date.

In addition to its extraordinary popular success, THE SERENITY OF SUFFERING has earned ecstatic critical applause around the world. “Possibly their heaviest album ever,” declared Rolling Stone. “(THE SERENITY OF SUFFERING) really shines on some truly weird, inventive bridges and codas that switch moods like a DJ flipping the crossfader.” “Monstrously heavy from the opening riff onwards,” raved The Guardian, “this is classic KORN: the grooves are lumbering hulks of viscous sludge, frontman Jonathan Davis’ red-eyed angst fizzes with worldly rage and nearly every song boasts a chorus that will wreak havoc when played to diehard crowds…”