Joining an elite group of institutions worldwide, the Great American Songbook Foundation at the Center for the Performing Arts has been named a Cultural Affiliate of the Los Angeles-based GRAMMY Museum®.

As a Cultural Affiliate, the Songbook Foundation will have access to GRAMMY Museum exhibitions, educational initiatives, research programs, internship opportunities, technical support, collaborative promotion, and more. The Foundation is joining a select group that includes only the Bob Marley Museum in Kingston, Jamaica; the Woody Guthrie Center in Tulsa, OK; The Beatles Story in Liverpool, England; and the National Blues Museum in St. Louis, MO.

Museum will be in Palladium

Housed at the Palladium – flagship performance hall of the affiliated Center for the Performing Arts – the Songbook Foundation operates an exhibition gallery and maintains the Songbook Archives & Library. The Archives comprises over 100,000 documents, images, recordings and other artifacts representing some of the greatest songwriters, arrangers and performers of the 20th century. Highlights include the collections of lyricist Gus Kahn (“Ain’t We Got Fun,” “It Had to Be You”) and composer-playwright Meredith Willson (The Music Man, The Unsinkable Molly Brown).

“The Songbook Archives is a one-of-a-kind repository preserving the legacy of an enormously important era in music,” said Bob Santelli, Founding Executive Director of the GRAMMY Museum. “We are very pleased to welcome this organization into our affiliate network and help broaden its impact for musicians, students, historians and all devotees of American music.”

“We share so much with the GRAMMY Museum in terms of our artistic, historical and educational mission,” said Feinstein, the celebrated performer and preservationist known as “the ambassador of the Great American Songbook.” “It is tremendously gratifying to me, both personally and professionally, to see the cultural importance of the Songbook being recognized in this way.” 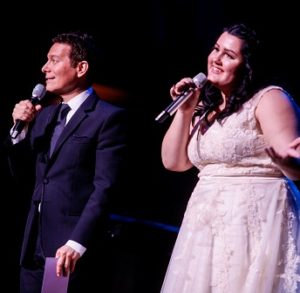 Lewis said the affiliation poses exciting possibilities for the Songbook Foundation’s many educational and outreach programs aimed at schools, community groups and music lovers of all ages. The announcement came during the Foundation’s annual Songbook Academy®, a summer intensive that draws top high school performers from across the country for a week of workshops, performances and mentoring from Feinstein and other performing arts professionals. The two organizations have been in talks for months about the potential for collaborative exhibitions and education initiatives, Lewis said.

The Songbook Foundation and the Center for the Performing Arts are housed in facilities built by the City of Carmel as part of its strategy to leverage the arts as a driver for economic development. Mayor Brainard said the GRAMMY Museum affiliation reinforces the growing regional and national reputation of a city that is regularly ranked among the best places to live in the United States.

“This is exciting news not only for Carmel but for the entire region,” Brainard said. “We’re proud to be known nationally as a community that supports and celebrates the arts.”