Save for his 2000 debut “Memento,” director Christopher Nolan’s career has been all about spectacle, often at the expense of character development.  Think the “Dark Knight” trilogy or 2014’s “Interstellar.”  Now Nolan has tackled the war movie genre in much the same fashion.  “Dunkirk” masterfully depicts the horror of war – the special effects and the Hans Zimmer score are haunting – but his accomplishment comes in lieu of anyone we care about.  It’s a big war video game without a heart. 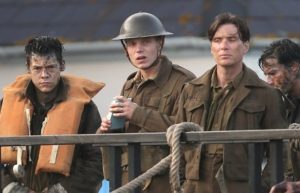 “Dunkirk” tells the story of the end of the Battle of Dunkirk, the 1940 confrontation in which the Nazis pushed French and British troops to the north – isolating them on the beach where they were almost certain to meet their fate.  Nolan’s original screenplay migrates among three simultaneous accounts of heroism (one of land, one of sea, and one of air) in the face of grave danger.

In his first major role, British actor Fionn Whitehead plays a soldier determined to board one of the few ships designated to return soldiers to Great Britain.  He and a fellow cadet (Aneurin Barnard) grab a stretcher to transport a dying soldier to the ship as it’s about to pull out.  They successfully help the wounded warrior, while just missing the ship themselves.

Eventually, they hole up inside an abandoned steel boat with some other troops, only to find the German’s are using it for target practice.  One Direction singer Harry Styles plays another British army private in his acting debut.  Kenneth Branagh and James D’Arcy play the admiral and colonel assigned to keep peace and order amongst the hoard of soldiers, as they face German bombing amidst their seemingly eternal wait for transportation.

In the air, we follow a Royal Air Force fighter pilot played by Tom Hardy, as he trades ammo with German pilots.  If anything, Hardy’s performance rises above any of the others, as he is tasked with emoting his every feeling behind his aviator mask.  We can see only his eyes for the bulk of “Dunkirk,” yet we know his every emotion.

My favorite story (and ironically the tale least dependent upon special effects) concerns a pleasure boat owner (Mark Rylance), his son, and his son’s best friend, who are asked to traverse the English Channel to pick up British soldiers and bring them home.  The fact that common mariners were tasked with this chore is a little-known nugget, serving to make this chapter the most endearing of the three.  Rylance’s character is obviously a war buff – He correctly identifies all the fighter planes he sees – which helps him in his task, and provides teaching moments for the teenage boys.

The three pick up a downed pilot along the way, but he refuses to return to the smoldering battlefield of Dunkirk.  Tensions rise before the sailors ever reach their destination.  For my money, this should have been the primary plot thread, as opposed to that involving the foot soldiers intent on boarding the next ship.

Where does “Dunkirk” rank amongst recent war movies?  Let me put it this way.  Steven Spielberg has been criticized for manipulating our emotions throughout the course of his films.  While I don’t dissent from this interpretation of his work, I often find it works to his advantage.  In 1998, Spielberg set the standard for modern-day war pictures with his classic “Saving Private Ryan.”  In that film, we genuinely cared about the small band of soldiers assigned to return a fellow warrior from behind enemy lines.  There were no alternative stories.  The lone plot was all we needed.

In Nolan’s case, I fault his reliance upon focusing on the gritty battle of war without providing us any deep characterizations (although the independent mariner thread comes close).  If his impetus for making “Dunkirk” is to throw the war directly into our faces, Spielberg has him beat on that count too.  The first half-hour of “Saving Private Ryan” remains the most harrowing depiction of war ever put to celluloid.

Not a bad film

Don’t get me wrong.  “Dunkirk” is not a bad picture.  The effects and score are top-notch.  It should win a lot of the technical Oscars for 2017.  It must be fascinating on an IMAX screen.  But while all your senses will be bombarded with the sights and sounds of combat, your heart will be left crying out for something to care about.