This coming weekend, the Historic Artcraft Theatre in Franklin will be showing the first and best of the motion pictures pairing the comedic talents of Don Knotts and Tim Conway – Disney’s 1975 hit The Apple Dumpling Gang.  Even though each was more successful in his own individual career, Knotts and Conway teamed for several comedies in the 1970s and ‘80s.  Knotts (as you might imagine) was the nervous Nelly, and slightly smarter of the two.  Conway was the bumbling idiot who inadvertently drove his friend batty.  Conway was Stan Laurel to Knotts’ Oliver Hardy. 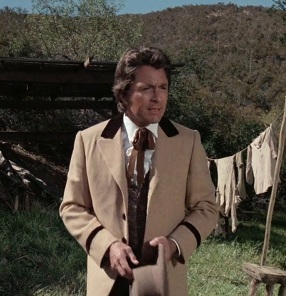 Now, why do I prefer Apple Dumpling to their other features?  Because Knotts and Conway aren’t the stars of The Apple Dumpling Gang.  The hero, or at least protagonist, is a gambler named Russell, played by the late Bill Bixby, who turns out to be the legal guardian for three recently orphaned children.  Russell isn’t thrilled about child-rearing, but the kids aren’t particularly keen on the glib, indifferent card shark either.  Sounds like the perfect set-up for a Disney flick, doesn’t it?

Norman Tokar directed a dozen Disney films, so he understood their modus operandi.  Don Tait (who adapted the Jack Bickham novel for the screen) wrote several screenplays for Disney – all of which involve perennially cute kids who initially dislike their new caretakers.  Think Mary Poppins only without the wonderful musical numbers.

And lest we fear a single man (a high roller, no less) serving as lone custodian for three children might appear dubious to the townsfolk, Russell arranges a marriage with a stagecoach driver after the kids discover gold – correctly anticipating the onslaught of others claiming familial relations.  It is at this point Russell and the juveniles acknowledge they’ve developed feelings for one another, and the familiar Disney structure is complete.

Bixby comes off as just a flashier version of Warren Beatty’s character from McCabe and Mrs. Miller.  And Susan Clark as the stagecoach driver (and, predictably, Russell’s eventual wife) is a standard character.  In fact, her most compelling feature is her name – Magnolia Dusty Clydesdale.  Can you picture what she looks like?  Her personality?  Correct, on both counts.

So what makes The Apple Dumpling Gang endearing after all these years?  The peripheral characters.  Unlike Mary Poppins (in which it really didn’t matter who played the supporting roles, so long as Julie Andrews and Dick Van Dyke played the leads), here the specifics of the primary story line truly don’t matter.  Yes, we have some cute kids and they discover gold in the hills near town.  That’s enough when the great Slim Pickens plays the evil businessman who wants to kidnap the children and steal their gold.  And Harry Morgan plays the town sheriff, judge, and barber, who knows everything about everybody.  And Knotts and Conway are the bumbling crooks also after the gold. 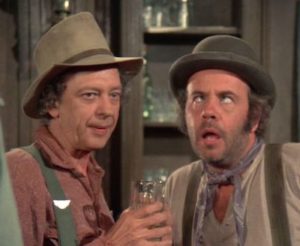 The magic of The Apple Dumpling Gang is that it works both ways:  The elementary story needs some humor to spice it up; and the town characters (especially Knotts and Conway) simply can’t carry a movie by themselves.  Try as they might, Don Knotts and Tim Conway were not as funny as they should have been when they were tasked with carrying an entire film.  Here, as supporting players, they provide the comic relief while leaving the heavy lifting (otherwise known as the plot) up to Bixby and Clark.

I feel the same way about Gene Wilder and Richard Pryor in Silver Streak.  With their comedic interplay relegated to supporting the story (rather than providing the story), they were never funnier.  Same with Knotts and Conway in The Apple Dumpling Gang.  The scene where they attempt to rob a bank by stealing a fireman’s ladder and suspending it between two buildings is as funny now as it was in 1975.

While Apple Dumpling received hit and miss reviews, it was Disney’s highest grossing film of the ‘70s.  I still enjoy it a lot, although I’d never put it on my list of Disney’s ten greatest pictures.  Fortunately, we have a chance to revisit the gang this coming weekend at the Historic Artcraft Theatre in downtown Franklin.  Shows are at 2:00 PM and 7:30 PM on Friday and Saturday, July 21st and 22nd.