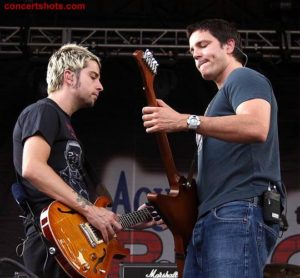 Third Eye Blind will be celebrating the April 8, 1997 release of its seminal, 7x platinum-selling self-titled debut by performing the album in its entirety for the first time, followed by a set of music through their latest releases, Dopamine and We Are Drugs.  An expanded reissue of Third Eye Blind will be out June 2 (Rhino).  The Third Eye Blind tour will make its local stop on the Farm Bureau Insurance Lawn at White River Park on July 9th.

From their widely heralded standoff with Donald Trump supporters during a non-partisan benefit show near the Republican National Convention (“Raise your hand if you believe in science?”) to record-breaking crowds at Lollapalooza and Outside Lands, Third Eye Blind is one of the most vibrant and volatile rock bands of the moment.

“We are all about fostering a feeling of aliveness and connection,” says Stephan Jenkins, who is performing the debut album for his audience, who – mostly due to word of mouth and streaming – is younger, larger, and more dedicated than ever.  “That’s why we have the summer vibes, because our heat comes from being alive and in the moment and you can only get it when you are willing to keep it real. No one can create the vibes we do fronting over a backing track.”

The Summer Gods tour will make its Indy stop July 9th.  Tickets are on sale now at http://www.livenation.com/