The Tenderloins are the comedy troupe behind truTV’s Impractical Jokers show.  Catch them in concert Saturday, July 8th in the Murat Theatre at the Old National Centre at 7:00 PM. 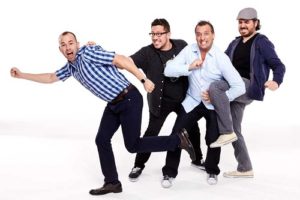 The Tenderloins are a New York-based comedy troupe whose four members – Joe Gatto, James Murray, Brian Quinn and Sal Vulcano – are the creators, executive producers and stars of truTV’s hit show Impractical Jokers. The show is now in its sixth season and continues to follow the outrageous shenanigans of The Tenderloins as they perform public pranks while being filmed on hidden cameras.

Natives of Staten Island, NY, Sal, Joe, “Murr,” and “Q” met while attending high school, and later formed The Tenderloins Comedy Troupe in 1999.  After years of performing live improv and sketch comedy shows, The Tenderloins crossed over to the web, garnering millions of views for the internet sketches, eventually creating the runaway success Impractical Jokers for truTV.  Impractical Jokers is top five in its timeslot on cable in the U.S., and is the #1 show on Comedy Central in the United Kingdom and India.

The troupe has toured across the nation over the last three years and will continue to do so with their new Santiago Sent Us tour, broadening the live show’s reach after four sold-out shows at The O2 Arena in London this past January. The live comedy performance delivers the same over-the-top stunts and belly laughs as the show, which ranks in the top five in its timeslot on cable in the U.S. and No. 1 on Comedy Central in the United Kingdom and India.

Tickets for the July 8th show are $53.00 each, and are on sale now.  This show is ages 16 and over, and parental discretion is advised.  For more information, visit www.thetenderloins.com