I’ve never been a big fan of sequels.  Too often, studios use them to make a quick buck because of the inherent built-in audience.  Having said that, my favorite Toy Story film was Toy Story 3, and I did like the recent Cars 3.  In both cases, the screenplays draw their respective series to logical conclusions.  Pierre Coffin and Kyle Balda’s new Despicable Me 3 does nothing of the sort.  Not only does it extend a tired, worn-out progression of animated features, but the ending sets us up for an even more unnecessary fourth installment.

At the end of the 2013 film, Despicable Me 2, Gru (strangely voiced by Steve Carrell, in sort of a Bela Lugosi way) had married Lucy (Kristen Wiig), and left his life of villainy for the straight and narrow.  We learn at the outset of the third chapter that both Gru and Lucy now work for the Anti-Villian League (AVL), locating and defeating the dreadful societal ilk of which Gru used to be a part.  Fired from their Anti-Villain jobs, Gru attempts to reinstate his way back into the good graces of the AVL by recovering the world’s largest diamond, recently stolen by a bad guy named Balthazar Bratt (Trey Parker, of South Park fame).  As with all the wretched refuse in this series, Bratt seems to exist for no other reason than to provide a bad guy.  His only motivating impetus appears to be wickedness for the sake of wickedness.  Cinco Paul and Ken Daurio’s screenplay has put no more thought into the character than that. 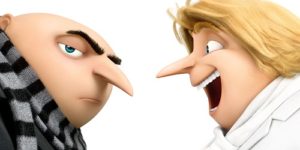 Meantime, Gru learns he was separated at birth from a twin brother he never knew he had – a particularly awkward method of introducing a new character (also voiced by Carrell).  The brother, Dru, proves to be a rich, boorish lout, who wants nothing more than to be a villain – and he asks his brother to help him.  So as Gru pursues Bratt and the diamond, he’s aided (or rather, hindered) by his brother, whose cat and mouse skills are even less adept than we might imagine. 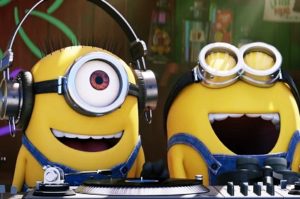 And what of the minions – the cute, endearing, yellow creatures who spout unintelligible gibberish, and work so well together in a proletariat sort of way?  Unfortunately, they’re hardly in this episode – even though they continue to be the only truly funny facet of this series.  Here again, they practically steal the show when they somehow find themselves on a television talent show, and (on the spur of the moment) break into a gobbledygook version of the Modern Major General number from Gilbert and Sullivan’s Pirates of Penzance.  Later, their method of breaking out of jail is particularly entertaining.  But it’s not enough to save this retread.

You know you’re watching a dud when the most exciting aspect of the movie is the soundtrack, chock full of 1980s music – which Despicable Me 3 intends to mock.  But much as with the 1970s music in The Martian, hearing Van Halen, Madonna, and Dire Straits again only made me long for a time when popular music was filled with soul and emotion.

And even more so than in the first two pictures, I felt the action moved at such a quick clip it was occasionally hard to follow.  For instance, I can’t even tell you how the minions end up in prison in the first place – nor can I tell you how they find their way to the television taping.  If I had difficulty keeping up, how do you think the little ones will do?

And here’s an inside joke your kids will not understand:  Where does Gru’s newfound brother Dru live?  On the remote Caribbean island of Freedonia.  Think you’ve heard of Freedonia before?  It was the name of the fictional country in which Groucho Marx was appointed president in the Marx Brothers’ 1933 classic Duck Soup.  In a twist of fate Universal Studios certainly couldn’t predict (or maybe they could), simply hearing the name “Freedonia” made me wish I were at a screening of any of the old Marx Brothers’ films.  With the same audience!  The children would have absolutely loved it.

Don’t get me wrong.  There are some endearing features of Despicable Me 3.  Lucy’s attempt to be a good mom to her three step-daughters is particularly touching.  And little Agnes’ desire to own a unicorn is sweet, if mildly confounding.  But the majority of this picture is wild, overcharged action, which will do absolutely nothing to soothe your repressed young ones as they unnerve your way through another summer break.  The Despicable Me series would actually work better as a Saturday morning cartoon.  Do yourself a favor and take them to see Cars 3 a second time.  Or better yet, seek out some old Marx Brothers pictures.  You’ll sleep better at night.  And so will they.