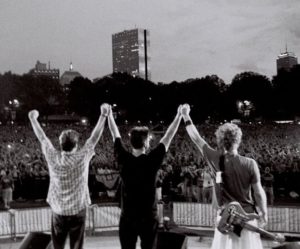 Dispatch is thrilled to announce their return to the road this summer for its headlining America, Location 12 Tour with special guests, Guster.  The America, Location 12 Tour is their first national tour in five years and kicks-off on June 16 at Morrison, CO’s Red Rocks Amphitheater and runs through July 9, wrapping at Philadelphia’s Mann Center.  The tour also hits select festivals along the way, including Telluride Bluegrass Festival, Levitate Festival and more to be announced.   The tour will make a stop at the Farm Bureau Insurance Lawn at White River State Park in Indianapolis, Indiana on Wednesday, June 28, 2017.

Along with news of the tour comes the release of the band’s new track “Only The Wild Ones” – the first new song to be released from their forthcoming summer studio album. More details on the new Dispatch album to be announced soon.  “Only the Wild Ones” is available on all DSPs and streaming services now.

Founded by college friends turned band of brothers Chad Urmston, Pete Heimbold, and Brad Corrigan, Dispatch released four rapid fire albums over four years and grew a tremendous reputation as a live act.  Before going on an extended hiatus, Dispatch came together for one final farewell concert in their adoptive hometown of Boston.  That performance at Hatch Shell would provide a testament to the band’s live prowess, drawing over 110,000 people from around the country and world.  In the years that followed, the three members always found their way back to one another – perhaps most notably for a string of three back-to-back sold-out benefit shows at Madison Square Garden dubbed DISPATCH: ZIMBABWE in 2007 and a performance at the Kennedy Center in 2009 at the invitation of Zimbabwe’s Prime Minister.

In 2011, Dispatch officially made its return, staging a full world tour and releasing its first studio album in over a decade, Circles Around The Sun.  They also went on to sell out another two-night benefit at Madison Square Garden in 2015, this time aimed at raising funds and awareness for hunger within America’s borders.

As evidenced by their long track record of benefit concerts and service projects around the world, giving back to communities in need remains a priority for Urmston, Heimbold, and Corrigan, who run and support several charities and social causes in their spare time. A portion of ticket sales along the America, Location 12 Tour will work to benefit local charities, more details from the band coming soon.