Winner of the Tony and the Drama Desk Awards for Best Book, The 25th Annual Putnam County Spelling Bee launches the summer series for The Indiana Performing Arts Initiative (IPAI). The troupe is under the umbrella of local non-profit theatre organization, Claude McNeal Productions.

We were impressed with talent and diversity of the cast – strong performances top to bottom.  Some of the minor characters shone the brightest.  This smaller house lends itself nicely to the nuanced performances in Director, Jeff Owen’s staging. 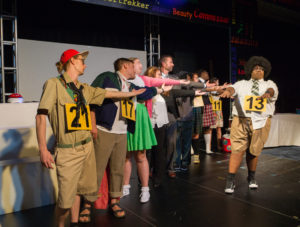 Of note: Josiah McCruiston’s “William Barfee” – that’s pronounced “bar FAY” –  neurotic characterizations went from a whisper to a roar in his featured “Magic Foot”.  As “Olive Ostrovsky”, Brooke Sheehy was a portrait of vulnerability and self-doubt in show’s most tender moment “The I Love You Song“. Hanna Elizabeth Boswell’s “Schwarzy” was just the right blend of confidence and  self deprecation;  Nik Folley as last year’s winner, “Chip Tolentino” is victimed by his own id and lack of concentration in “My Unfortunate Erection”. Rex Riddle was a study in whimsical ADD and kept me off-balance as”Leaf Coneybear”, a random-thought-generator of a kid; Gena King as “Marcy Park” was bold and confident in “I Speak Six Languages” before her imminent self-destruction.

I was attracted to the lesser characters as well.  Playing multiple roles, Samuel McKanney’s voice rocked the house on multiple occasions including the Act One climax – “Prayer of the Comfort Counselor” “Mitch Mahoney” – and, his tender take as Olive’s Dad in “The I Love You Song“.  Shauna Keith and Jason Plake were the only adults in the room as “Rona Lisa Peretti” and “Vice-Principal Douglas Panch”, respectively.  Both facilitated the “ad-lib” portion of the audience participation – and, provided several comic surprises.

Overall, the tight show is a fun ride – complete with audience participation. We hear While candid and touching disclosures from the contestants’ home lives,  as these tweens spell their way through a series of (potentially made-up) words, hoping never to hear the soul-crushing, pout-inducing, life un-affirming “ding” of the bell that signals a spelling mistake.  Six spellers enter; one speller leaves! At least the losers get a juice box.

More about the IPAI

True to its mission of placing students alongside working theatre professionals, the program had over fifty participants from local high schools and area college students working to further develop their skills in the performing arts.
This second season marks a return to the foundational roots of American cabaret for Claude McNeal Productions – as their second series offering is a musical review entitled BROADWAY. Performance dates are July 7-16.