The Historic Artcraft Theatre’s “Summer Break Series” continues next Tuesday morning with Joe Pytka’s 1996 box office smash Space Jam – a live-action/animation picture sure to delight the young ones.  And frustrate the heck out of their parents.  Why?  It’s not that Space Jam is a terrible film.  It’s just that it could have (and should have) been so very much better. 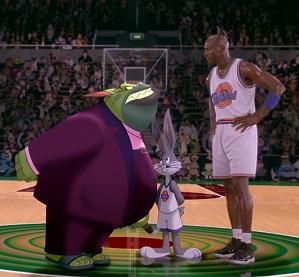 Problem number one is the convoluted plot.  The premise is that during his 1993-1995 hiatus from the Chicago Bulls, Michael Jordan’s short-lived minor league baseball career was interrupted by Bugs Bunny and the rest of the Looney Tunes characters.  On paper, linking the most popular athlete in the world (at the time) with the most popular Saturday morning cartoon characters in history seemed like pure genius.  What could possibly go wrong?

Well for starters, Bugs and the gang recruit Michael Jordan (playing himself) to help them win a basketball game.  At first, Jordan is uninterested, as his intention is to focus on a new sport – baseball.  But he changes his mind when a player from the opposing team insults him.  The climax is the game pitting Jordan and the Looney Tune characters against the bad guys.

Sounds like a reasonable plot, right?  Wrong!  The four screenwriters involved (which is so many it always sounds an alarm for me) have written one of the most ridiculous set-ups in motion picture history.  Who are the “bad guys?”  Are they simply a group of mean-spirited cartoon characters who challenge Bugs and his friends to a game of basketball?  No, that would be too logical.  These bad guys come from a failing amusement park located somewhere in outer space, whose manager sends them to earth to kidnap the Looney Tunes characters and bring them back to the park.

As if that’s not farfetched enough, the Looney Tunes don’t exist in the real world.  No, they live in an animated world located at the center of the earth.  Now why couldn’t four professional writers have written these beloved cartoon characters into the real world?  Wile E. Coyote and the Road Runner obviously live out west, as does Yosemite Sam.  Foghorn Leghorn lives in the South.  And Bugs Bunny and Elmer Fudd most likely live in the Midwest.  But no, in Space Jam they are curiously relegated to a different world. 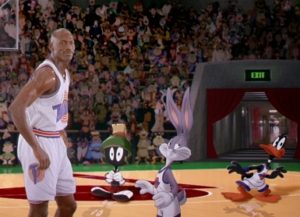 Rather than visiting the earth’s surface (i.e. the “real world”) for this basketball game, the Tunes suck Michael Jordan down to inner-earth via a golf hole when he’s golfing with Larry Bird and Bill Murray.  Yeah, I know.  The implausibility meter is going berserk now.  To complicate the “reality” of this plot establishment, in one of the funniest scenes, Bugs Bunny and Daffy Duck actually do visit the real world to confiscate Jordan’s basketball gear.  Now if the writing staff could write the Tunes into Michael Jordan’s house, couldn’t they set the rest of the screenplay on earth?

The bad guys believe they can defeat Michael Jordan because they’ve miraculously zapped the skills out of four other players of the ‘90s.  It’s always fun to see Charles Barkley, but let’s see how many recall Muggsy Bogues or Shawn Bradley.  Truth be known, if the screenplay were better-written, we wouldn’t spend so much time identifying the players making cameo appearances.

The climactic basketball game is actually the funniest sequence of Space Jam.  The bad guys, as you might expect, resort to cheap shots and cheating to win the game.  And the Looney Tunes respond with classic cartoon sight gags, each fitted to the personality of the individual character.  And what Looney Tunes motion picture would be complete without Wile E. Coyote’s assortment of Acme weaponry?  Not legal in basketball?  No worries.  It’s apparently legal here.

Unfortunately, there are simply too many Looney Tune characters to write meaningful roles for each of them.  It’s somewhat disconcerting to see Granny (of Tweety Bird fame) relegated to cheering on the rest of the team from the bench.  But the Tasmanian Devil scores one of the funniest scenes when he uses his “talents” to clean the playing surface.

An unnecessary distraction is the introduction of Lola Bunny, whose purpose seems to be nothing more than to provide Bugs Bunny a girlfriend.  Why Pytka and his writing staff deemed her necessary is beyond me.  And Wayne Knight (Newman, from “Seinfeld”) as Jordan’s assistant and publicist is about as annoying as you would predict.

Space Jam is a cute concept with a lot of flaws – particularly in the screenplay.  Your kids will love it, even though its mere existence is nothing more than a marketing ploy designed to sell tickets.  Other than Twister, 1996 was a bad year for Warner Brothers.  Maybe that’s why they churned out this piece of pop-culture shlock at the end of the year.  I liked certain parts of Space Jam, but watching it often feels like nothing more than placing a donation in Warner Brothers’ proverbial offering plate.

But again, kids absolutely love this film – even those too young to know Michael Jordan.  It shows Tuesday, June 27th at 10:00 AM at the Historic Artcraft Theatre in downtown Franklin.