I’ve never been a big fan of sequels.  Other than Toy Story 3 and any of the Pink Panther films that starred Peter Sellers, I can’t think of a sequel I enjoyed more than the original.  So it was with this trepidation that I saw Disney/Pixar’s latest release, Cars 3, the third (and most likely final) installment in the popular series that began back in 2006.  (Has it really been that long?)  Fortunately, it’s not necessary to have seen either of the first two installments, but a basic knowledge of the characters helps. 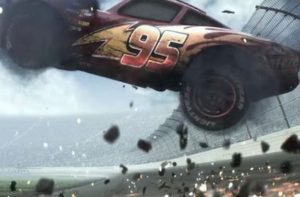 In the original chapter, Lightning McQueen (voiced by Owen Wilson) was a young hotshot race car mentored by the retired Doc Hudson (the late Paul Newman).  This time it’s Lightning on the cusp of his farewell, and he’s in a world of hurt.  First, he’s unable to keep up with the new young breed of race car – those pumped full of technical data on downforce, g-force, and velocity.  Now, I realize Indy 500 drivers have dealt with this kind of high-tech information for years, but just go with me here.  Unable to pass his new rival Jackson Storm (Armie Hammer), Lightning makes a risky racing manoeuver which results in a terrible crash at the end of the season’s final race.

After contemplating retirement, Lightning decides to join the high-tech crowd and become one of them.  He takes up residence in an exclusive training facility run by a rich car-owner.  But allowing his reticence to adapt to the new methods to stand in his way, Lightning eventually parts ways with the facility.  Save for one new friend – his trainer, a beautiful yellow car named Cruz (comedienne Cristela Alonzo).  You see, Cruz has always wanted to be a racer just like Lightning.  And lightning needs Cruz to train him.  Can you tell where this is going?

The middle third of Cars 3 is its best, as Cruz and Lightning swap techniques and share stories of their backgrounds – all the while training in some of the most absorbing settings, including a Florida beach, a backwoods figure-eight smash-up derby (involving an evil school bus named Miss Fritter), and a visit to see Smokey – Doc Hudson’s old crew chief.  Smokey, voiced by Chris Cooper, shares enough about Doc to inspire Lightning to sign up to participate in the first race of the new season.

As you might expect, the final race plays out a little like the end of “Toy Story 3,” in which Andy goes off to college and leaves his beloved toys with a young girl.  Here, the proverbial torch is passed from Lightning to Cruz.

I loved the fact that nothing is made of the fact that Cruz is a woman.  Yes, in the final race she is verbally insulted by the quick, young champion Jackson Storm, but he would have said “You don’t belong here” to whomever was Lightning’s protégé.  No, Pixar (director Brian Fee and three Disney screenwriters) assumes we’re long past marveling about the fact Danica Patrick can race with men at a successful level.  We are, but it’s nice to see the Hollywood acknowledgement of such.

I also liked the fact that there’s no romance between Cruz and Lightning.  After all, Lightning’s girlfriend continues to be Sally (Bonnie Hunt), who returns as a supporting character for “Cars 3.”  Lightning’s relationship with Cruz is simply mentor/student.  As it should be.

I continue to love the fact that all the Cars characters are, in fact, cars.  There are no drivers; the cars themselves are the stars.  Their headlights act as their eyes, and the radiators their mouths.  It’s a very cute concept, and I never tire of its creativity.  Even the television race announcers (including Bob Costas as Bob Cutlass) are cars.

And Mater the tow truck (Larry the Cable Guy) is still my favorite character.  After taking a starring role in the unnecessary Cars 2 (2011), he returns to his supporting role as Lightning’s best friend.  Mater’s obsession with mud flaps is the funniest running joke in Cars 3.  And I still like the casting of Cheech Marin’s instantly recognizable voice as Ramone, the low-rider who paints numbers and designs on Lightning.

Now again, Cars 3 is not in the same class as Toy Story 3.  The ending is full of hope and excitement, but it is not sentimental.  No need to bring the Kleenex this time.

Cars 3 provides a welcome sense of closure to the second most creative of the Pixar franchises (after Toy Story).  If Pixar ever deems it necessary to spit out a Cars 4, I will gladly skip that one.  It’s now time to put this series to rest.

Andy Ray’s reviews also appear on http://www.currentnightandday.com/, and he serves as a film historian for http://www.thefilmyap.com/