Best known for ’80s hits such as “Steppin’ Out” and “Breaking Us in Two,” eclectic composer and musician Joe Jackson will draw material from across his four-decade career when his Fast Forward Tour comes to the Palladium on Friday, June 16. 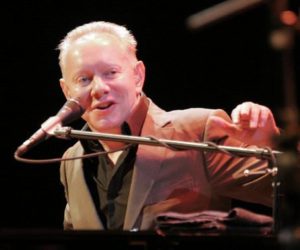 Few contemporary artists have explored the musical landscape as fully as the British-born Jackson, whose output has spanned the worlds of pop, rock, classical, reggae, R&B, salsa and swing. Though a graduate of London’s Royal Academy of Music, he made his first commercial impact as a new-wave singer-songwriter with the 1979 album Look Sharp and its cheeky Top 20 single, “Is She Really Going Out With Him?”

Since then, his inventive melodies and wry lyrics have drawn comparisons to the Gershwins and Cole Porter as he topped the charts in the golden age of MTV, picked up five Grammy nominations, composed several film soundtracks and released tributes to Duke Ellington and Louis Jordan. Jackson’s latest album, Fast Forward, is a globetrotting project featuring four sets of four songs each, recorded in four different cities – New York, New Orleans, Berlin and Amsterdam – with different teams of guest musicians.