One of the motion picture treats of the summer continues this year with the Historic Artcraft Theatre’s “Summer Break Series” – a succession of family films held (this year) on Tuesday mornings at 10:00 AM.  Need an activity to break up the kids’ summertime boredom?  These movies are just the ticket. 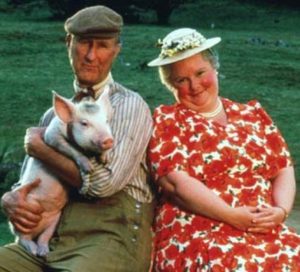 This season began the other day with Fievel Goes West, and continues next Tuesday with Babe, a 1995 Australian feature about a cute little pig who thinks he’s a sheep.  Sound ridiculous?  It’s actually one of the most charming family films ever made, and one of the best pictures that year!

First, a little background.  Walt Disney’s 1967 death marked the end of the first golden age of classic full-length animated family films.  Then in 1989, the studio that bears his namesake promptly began the second (and current) wave of family films with the release of The Little Mermaid — a captivating story that revived the prototypical “Disney princess” yarn, and peppered it with singable melodies like those of the original Disney features.  More treasures followed:  Beauty and the Beast, Aladdin, and The Lion King.

Then in 1995, Pixar Studios (a division of Disney specializing in computer animation) released its first full-length picture, Toy Story.  The animation was so fresh, it seemed like we were experiencing a whole new world.  But in typical Disney fashion, the story and screenplay were timeless.  The Pixar classics kept coming:  A Bug’s Life, Monsters, Inc., Finding Nemo, Cars, and Up, just to name a few.

Aardman Animations, the British studio behind “Wallace & Gromit,” released the hilarious Chicken Run in 2000, which quickly became the highest-grossing stop-motion animated feature ever.  More material followed from Aardman too.

Lost in the shuffle

As we look back, lost in the shuffle of the new wave of family films was Universal’s low-budget 1995 winner, Babe.  It was a big hit, and (along with Toy Story) was one of my top ten films of the year.  It deserves to be seen again.  Brilliant in its simplicity, and moving in its heart-tugging narrative, Babe still stands as a monumental achievement in filmmaking. 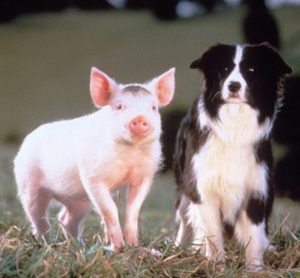 Featuring no animation (save for some animatronic mouths, which make it appear as though the animals are actually speaking), Babe tells the unpretentious story of an orphaned piglet raised by a farmer named Arthur (the great James Cromwell), his wife Esme (Australian actress Magda Szubanski), and their border collie, Fly.  The gist of the story is that Arthur enters Babe in a sheep-herding contest.  Yes, really.

But there are emotional moments, such as Babe’s escape to a nearby cemetery when he learns that people eat pigs.  And there are whimsical scenes too, especially those involving Arthur’s rooster, which is actually a duck in disguise.

Babe is perfect for most children, but animals do die in it.  One of the farm ducks is prepared for Christmas dinner consumption, and feral dogs attack one of Arthur’s sheep.  But for kids who are keenly aware of the so-called “circle of life,” this little film is an absolute joy.  With all the competition from a revived Disney studio, and the new Pixar, Babe was the little engine that could – not only the pig himself, but the movie.

And one of the reasons it was such a big box-office hit is that the George Miller and Chris Noonan screenplay didn’t talk down to children.  Babe isn’t so saccharin sweet as to dissuade adults from repeated viewings, but it isn’t so sarcastic and knowing as to confuse or upset the young ones.

As director, Noonan gives us a good-hearted, evenly-paced story of a little pig trying to find his way in a big world.  Babe features no explosions, no superheroes, and no gunfire.  It is as close to perfect as any family film I’ve seen.  And like Beauty and the Beast four years earlier, was nominated for a well-deserved Best Picture Oscar.  Make sure the kids see this one next Tuesday.