92.3 WTTS is proud to present Elvis Costello & the Imposters in concert Saturday, June 10th at 7:30 PM in the Murat Theatre at the Old National Centre. 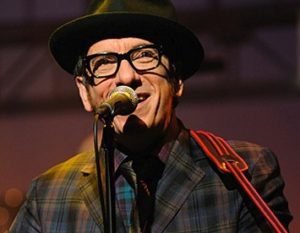 English musician, singer-songwriter, and record producer Elvis Costello began his career in the 1970s while performing in London pubs. His works later developed into the first surge of the British punk and new wave movement that came about in the 1970s. Costello has released numerous studio albums over the years, producing award-winning hits and inventive collaborations with several artists, including Paul McCartney and Burt Bacharach, the latter with whom he won a Grammy Award with in 1999 for Best Pop Collaboration with Vocals. The Imposters serve as Costello’s backup band, regularly touring with Costello on a global scale and collaborating on three studio albums and one EP together.

The June 10th show’s tickets start at $35.00, and are on sale now.  To order, contact the box office, or visit www.elviscostello.com