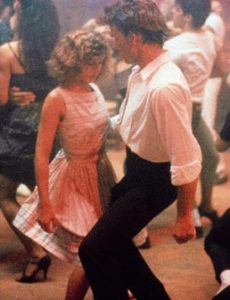 A funny thing happened in the fall of 1987.  Low-budget Vestron Pictures had released a low-budget indie in mid-August of that year – a time for throwaway films not expected to do much box office (i.e. after the summer blockbuster season, but before the Oscar race).  The film was called Dirty Dancing, and it was actually predicted to play for one weekend then go straight to video.  But guess what?  Not only was Dirty Dancing the surprise hit of the year, it was the most popular video rental of 1988, and it became the first video to sell a million copies.  It was the kind of picture whose success depended on word of mouth.  I don’t recall ever seeing a commercial (or even a trailer) for Dirty Dancing.  But it was one of those where you’d hear people ask one another, “Have you seen Dirty Dancing yet?” – as though it were a rite of passage.

Not expected to be box office smash 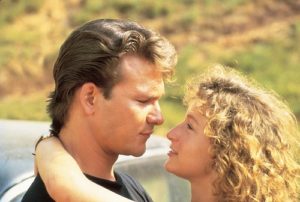 Now, why was this sleeper such a monster hit at the box office?  It starred Jennifer Grey (a virtual unknown whose primary claim to fame was that her father was actor/singer/dancer Joel Grey, star of stage and screen) as “Baby,” a rich older teen vacationing with her family at a resort in the Catskills during summer of 1963.  Through a happenstance plot twist, Baby meets (and later falls for) a working-class dance instructor employed by the resort – Johnny, played by then B-list star Patrick Swayze.  Heretofore, Swayze had been known for tough-guy roles; most of us didn’t know he was a classically-trained dancer.  But he was the closest thing to a star to appear in Dirty Dancing.  Jerry Orbach (Baby’s father) was a Broadway actor, whose well-known stint on “Law and Order” wouldn’t begin for another five years.  And Jack Weston (the resort’s owner) was a character actor most moviegoers would not have recognized by name.

Like Grease, West Side Story, or My Fair Lady, the idea of a couple mismatched by socio-economic status almost never ceases to please audiences.  Unlike those films, Dirty Dancing was not a musical – its characters did not break into song.  But music played a vital role; four of its songs hit the Billboard top ten during 1987 and 1988.  But like Grease, Dirty Dancing proved to be mismarketed to a teenage audience. 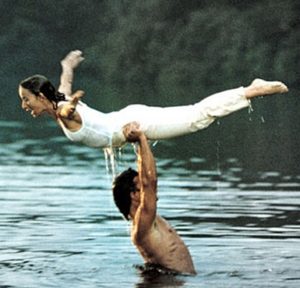 In fact, both films became huge hits with older audiences – likely because both harkened back to a more innocent (read: pre-Vietnam, pre-Watergate) time, when classic love stories could be told without an all-knowing sarcastic wink.  Dirty Dancing was a straight-ahead love story with a breezy soundtrack and a feel-good screenplay (which writer Eleanor Bergstein had been shopping for years), that did not make the frequent mistake of “talking down” to its audience.  In other words, Bergstein and director Emile Ardolino included just enough modern sensibility (including a botched pre-Roe v. Wade abortion) to make Dirty Dancing more palatable than, say, a rerelease of an old MGM musical from the ‘40s would have been.

Title is all wrong

I never did like the film’s name, however.  The dancing performed by Johnny and his fellow employees was a little more risqué than what the resort patrons were used to.  But within the context of the 1963 setting, there was nothing “dirty” about the dancing.  Again the attempt seemed to be to draw a younger audience, who might be expecting to see raunchy pole dancing but then come away with a deep appreciation for the film they’ve just seen.  I understand the title.  But I still don’t like it.

Dirty Dancing’s legacy is inspirational.  Swayze went on to become a bigger star as a romantic lead than he had as a ruffian.  He scored the lead in the 1990 smash Ghost, opposite Demi Moore.  Grey moved on to a career in television and Broadway.  And Orbach voiced the candelabra in Disney’s 1991 classic Beauty and the Beast prior to his long stint on “Law and Order.”

Fortunately, all attempts at a remake or a sequel have failed.  While certainly not a great film – the script is often trite, and the ending too neatly ties all plot points into a nice little bow – Dirty Dancing deserves to stand on its own merits.  No sequel required.  And if any studio ever remakes it, do yourself a favor and watch the original.

And speak of the devil, you can watch Dirty Dancing on a big screen this coming Friday and Saturday, June 9th and 10th, at the Historic Artcraft Theatre in downtown Franklin.  Many will be seeing Dirty Dancing for the second or third time.  Again don’t expect the greatest dancing picture ever made (although the dancing itself is dynamite), but it’s one that sits well in our collective memories.  If you’ve never seen it before, you may feel like owning a DVD/Blu-Ray copy after watching it at the IMA.  Dirty Dancing is a real treat.  To order tickets, visit http://www.historicartcrafttheatre.org/