Humphrey Bogart and Lauren Bacall made four pictures together during the 1940s.  The Big Sleep is my favorite, although I also loved their final joint effort, John Huston’s 1948 film noir, Key Largo.  We’ll have a chance to see Key Largo this coming Friday and Saturday, June 2nd & 3rd, at the Historic Artcraft Theatre in downtown Franklin. 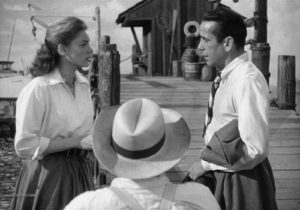 Bogie plays Frank, a former soldier visiting the Key Largo hotel owned by the father of a good friend he lost in battle in the Italian theatre.  The deceased soldier’s father, Mr. Temple, is played by Lionel Barrymore (of It’s a Wonderful Life fame), and his widowed wife is played by Bacall, who develops an instant attraction to Frank.  With a hurricane approaching, the hotel has just a handful of guests – all of whom turn out to be Cuban mobsters working for the notorious Johnny Rocco (Edward G. Robinson), which has to be one of the greatest villain names in motion picture history.

The local sheriff and his deputy are on to the presence of the contemptible lot, and after they leave the hotel, Rocco and his men take Frank and the Temples hostage.  After Rocco’s American contact arrives to make a counterfeit money transaction, Rocco and his men force Frank to take them to Cuba on a stolen boat.

If Quentin Tarantino had been making feature films in the ‘40s, his pictures probably would have been a lot like Key Largo.  It’s full of gangsters, double-crosses, and mistaken identities – with a hurricane thrown in for good measure.  It’s not hard to follow, but you do have to pay attention.

And of all the Bogart/Bacall pairings, the love story is less important in this story than in the others.  Yes, their characters do share a passion for one another, but Bacall’s character is not crucial to the plot.  I do however believe this was the best of the four pictures Bogey made with Robinson.  Much as with many of the characters in westerns of yesteryear, Humphrey Bogart and Edward G. Robinson were real men.  They fought when they needed to, and wore their “battle scars” on the lines and crevices of their creased faces.  The difference was Bogart’s characters always knew how to treat a lady, whereas Robinson’s did not. 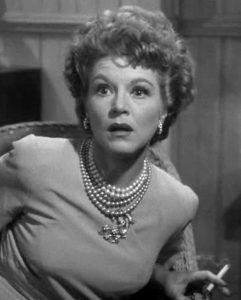 The real star here (other than Robinson – Could anyone do “pure evil” as well?) is character actress Claire Trevor, who won a Best Supporting Actress Oscar for her role as Rocco’s “girl” Gaye Dawn (again, a perfectly matched name) – a former nightclub singer whose heartbreaking rendition of “Moanin’ Low” is an actual highlight – not merely a song thrown in to pass the time.  As Gaye delivers the lines about a mentally and physically abused woman, she realizes she’s singing about herself.  As her voice breaks at the song’s end, we feel her pain.  Other than the finale aboard the sea vessel, it’s my favorite scene in Key Largo.

This may not rank as one of Bogey’s half-dozen best pictures, but that’s not saying much.  He had twenty years of classics, and Key Largo is one of them.  I’m glad the Artcraft decided to feature Key Largo as part of this year’s line-up.  It’s always a fun one to watch again.  Shows are at 2:00 PM and 7:30 PM on Friday and Saturday.  Tickets are $3.00 and $5.00, and can be purchased at the Artcraft’s website, http://www.historicartcrafttheatre.org/