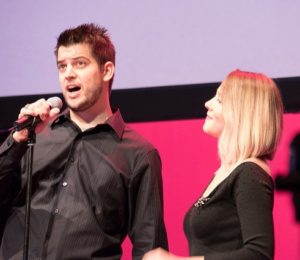 Experience the rich culture of Italy with the Indiana Wind Symphony and accomplished operatic singers Bryn Chapman Vertesi and Campbell Vertesi.  Featuring music from Verdi, Denza, Rossini, Puccini, Delle Casse, and others, conductor Charles Conrad invites you to join the IWS for Dreams of Italy on Friday, May 26th, 7:30 PM in the Palladium.

Bryn and Campbell Vertesi are opera singers who have been living and performing across Europe since 2009. Though they have both embarked on successful solo careers, they have always shared their passion for music through duet performances and concert operas together. They have most recently been touring all over Europe with their opera band, THE CAST.

Native of Carmel, Indiana and former Miss America finalist and regional spokeswoman Bryn Vertesi (née Chapman) has performed operatic roles in a wide range of styles. She is also comfortable in American Musical Theatre, having performed in shows such as Camelot and West Side Story. Bryn made her European debut in Salzburg in 2007 and has since been living and performing all over France, Holland, and Germany.

Though young for a bass, Campbell has already debuted many traditional operatic bass roles. But his rich, warm voice is most at home singing deep American spirituals, such as Old Man River and Shenandoah. Campbell made his European debut singing in Giacomo Puccini’s hometown with the Music festival of Lucca, Italy in 2004.

In 2012, Bryn and Campbell founded the opera band, THE CAST. The band consists of six singers and a pianist, who perform real opera with the style and energy of a rock group. THE CAST released their first single and music video Lippen Schweigen in 2013, which was followed by a documentary film by director Jorgos Katsimitsoulias about the group. The documentary OPERATIC was screened in theaters world-wide in 2015, including France, Germany and the United States. Since then THE CAST has been touring across Europe, performing in various theaters and festivals in Germany, France and Austria. For more information and tour dates, visit https://thecastmusic.com/