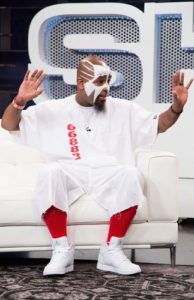 While he debuted in the underground realm of horrorcore and seemed destined to be a future footnote, rapper Tech N9ne has grown to become an indie rap superstar, building his Strange Music label in the process. From his 1999 debut The Calm Before the Storm to 2016’s The Storm, Tech N9ne has always remained true to his roots while pushing himself to make more “powerful” music, selling over two million albums as his music continues to be featured in television, films, and video games.

Tech N9ne will be appearing Saturday, May 20th, 8:00 PM, in the Egyptian Room at the Old National Centre.  He’ll be appearing with fellow Strange Music artists Krizz Kaliko, Brotha Lynch Hung, Stevie Stone, and Ces Cru.  Tickets are on sale now.  Prices are $30.00 for the first 400 tickets sold, $35.00 after that, and $45.00 the day of the show.