With a new compilation album spanning his quarter-century in music, British singer-songwriter David Gray comes to the Palladium at the Center for the Performing Arts on Tuesday, May 23, for a special solo acoustic evening. 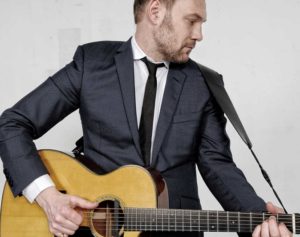 Launching his professional career in the early 1990s, Gray distinguished himself from the pack with introspective lyrics and simple arrangements complemented by digital beats and samples, as heard on the Manchester native’s breakthrough fourth album, White Ladder. Recorded at home as an independent project, it became a hit on both sides of the Atlantic after its 2000 re-release on Dave Matthews’ ATO Records, with singles such as “Babylon” and “Please Forgive Me” that remain radio staples. Gray is reportedly working on a new studio album, his 11th and the first since 2014’s Mutineers.

The Best of David Gray, released in October on CD and LP, is a 16-track set of greatest hits that includes two new cuts. The deluxe version features an extensive booklet and a second set of 15 additional songs. Adding to Gray’s reputation as an innovator, the album also is available on Spotify as an interactive collection, The Best of David Gray Weekly, which reorders itself every week based on the number of times each track is streamed.

This Drewry Simmons Vornehm Series event is part of the Center’s 2016-2017 season presented by Allied Solutions.

The Palladium at the Center for the Performing Arts, 1 Center Green, Carmel, IN 46032