Baseball legend Pete Rose will share tales from his record-shattering and controversial career in this special appearance at the Palladium, Friday, May 5th at 8:00 PM. 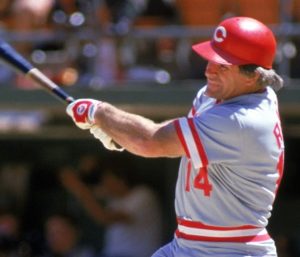 Rose made his Major League Baseball debut in 1963 with the Cincinnati Reds and closed his career as the team’s manager in the late 1980s. He became a household name as a member of the “Big Red Machine,” the Reds lineup that won back-to-back World Series in 1975 and 1976. Dubbed “Charlie Hustle” for his energetic approach to the game, Rose also played for the Philadelphia Phillies and the Montreal Expos.

One of the best all-around players in baseball history, Rose played in 17 All-Star Games in five different positions (first base, second base, third base, left field and right field), an unprecedented feat. Among his many records, he remains MLB’s all-time leader in hits (4,256), games played (3,562), at-bats (14,053) and singles (3,215).

Tickets for Rose’s May 5th appearance start at $40.00, and are on sale now.  Call the Center for the Performing Arts box office to order or for more information.