By now you’ve probably seen the trailer or read about the premise of Nacho Vigalondo’s Colossal, and you’ve probably decided to skip something with such a ridiculous set-up.  This is the new release about a young American woman (Anne Hathaway) who somehow controls a giant monster destroying Seoul – halfway around the world.  Let me begin by saying I was skeptical too.  Something this off-the-wall should be either an animated movie for kids or a horror movie for teens.  I was very leery of how educated adults are supposed to channel such a bizarre supposition, and process it without severe reservations.

The trick, my friends, is to leave a certain degree of rationality at home – but only insofar as the initial fable is concerned.  Once we realize Gloria (Hathaway) – and even her friend Oscar (Jason Sudeikis) – is inadvertently wreaking havoc halfway around the world, the remaining plot developments actually work themselves out logically.  This isn’t anything akin to many action films,, in which the entire screenplay hinges on the filmmakers’ creation of an alternative universe.  Colossal is entirely of this world.  If you buy into the whole monster-movie genre, you’ll be fine.

Anne Hathaway’s Gloria has just been thrown out of the New York high-rise apartment she shares with her British boyfriend Tim (Dan Stevens), due to her recurring drinking problem.  With no money and no future, she returns to her unnamed hometown and promptly runs into Oscar, an old chum from school.  Oscar owns the local pub, and invites Gloria to come work for him to help her get back on her feet.  He also brings her an air mattress, plus a huge television from the bar’s storage room.  In fact, Oscar is such a nice guy, we believe he’ll turn out to either (a) have the hots for Gloria, or (b) be hiding a dark, sinister side. 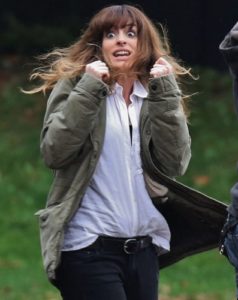 Kudos to you if you chose answer (b).  When Oscar begins to lash out at not only Gloria but some of his best longtime friends, we wonder if he isn’t possessed.  Remember, Colossal is a pseudo monster movie.  Turns out, Gloria has Oscar’s number, and the proceeding plot developments turn Colossal into one of the real joys of the 2017 motion picture season.  You won’t be able to predict where this one is going, but it all makes sense within the framework established by Vigalondo, who also wrote the screenplay.  This is the first wide-release picture for the accomplished Spanish-American director.

As far as the Korean monster is concerned, Gloria first notices the monster mimics her moves – but only at a certain location, and only at a certain time of day.  As the curious and (somewhat) morbid public converges on Seoul every night at 8:05 PM, Gloria “controls” the monster’s every move in a public playground at 8:05 AM in her hometown. Now, logic would advise me to simply stay away from the playground at that hour, but Gloria makes the mistake of modeling her newfound power to Oscar and his friends.  As the days ensue, Oscar begins to take advantage of Gloria’s capability, and finds that he is also able to control a giant Korean being.

What follows is not only a parable about the consequences of overdrinking, but a power struggle between two strong-willed souls.  Gloria discovers an inner strength she never knew she had.  And Oscar misuses a position of notability and authority to which he’s never been privy.  As an allegorical parable, Colossal reminds me of the Coen Brothers’ 1987 comedy classic Raising Arizona, although more realistic within the confines of the script.

Anne Hathaway has never been better.  Ever.  She is so convincing she quickly suspends our disbelief in monsters (and cross-world monster control), keeping our mental expectations here in the so-called real world.  The monsters are illustrative of the larger story – a very human story, and one which should result in Hathaway’s receipt of an Oscar nomination.  Sudeikis is also strong enough to warrant such recognition.  This is easily the best job of acting so far in the young career of the Saturday Night Live alum.  And Vigalondo’s screenplay is the most original of any so far this year.  It’s on a level with those of Charlie Kaufman and Spike Jonze.  In fact, Kaufman’s and Jonze’s 1999 offering Being John Malkovich probably comes as close to Colossal as anything I could offer as a comparison piece.

Other than the film’s name (An adjective? Really?), I loved everything about Colossal.  It ranks with Amma Asante’s A United Kingdom as the best picture I’ve seen so far this year.  Given the offbeat premise, Colossal may not last long at the local Cineplex.  Catch this one soon, and then hope Oscar voters remember it next winter.  It’s that good.