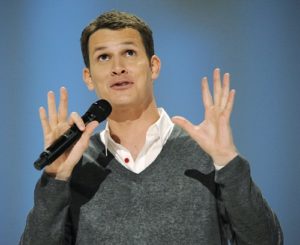 Daniel Tosh and special guests will be bringing his comedy to Indiana University on Tuesday, April 18.  Tosh.0 is currently in its ninth season and airs on Tuesday nights at 10:00 p.m. ET on Comedy Central. Daniel Tosh will host and perform an evening of standup comedy featuring writers and comedians from his Comedy Central show Tosh.0.

Tosh started touring the comedy club circuit almost immediately after graduating from college.  He appeared as one of the “New Faces” at the 1998 “Just for Laughs” in Montreal.  His act was televised in 2000 in Montreal at the Theatre Saint-Denis.  Tosh’s first big career break dame in 2001 with a performance on the “Late Show with David Letterman.”  He made appearances on programs such as “The Tonight Show with Jay Leno,” “Jimmy Kimmel Live!” and Comedy Central’s “Premium Blend.”  He hosted a local late-night comedy show in Florida called “Tens,” and served as a spokesman in Taco Bell commercials.  Tosh has been a regular guest on radio shows such as “The Bob & Tom Show,” “Loveline,” and “Kevin and Bean.”

Tosh’s Comedy Central television show Tosh.0 premiered on June 5, 2009, based on showcasing internet video clips.  His mocking humor is described as “envelope pushing,” and frequently features punchlines which are intentionally self-deprecating, racist, sexist, or homophobic.  Tosh’s explanation of his non-politically correct humor is, “I’m not a misogynistic and racist person… But I do thing those jokes funny, so I say them.”