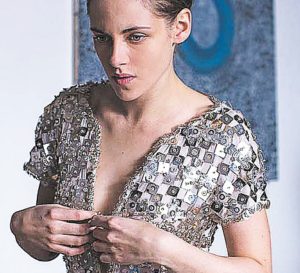 Boy is Kristen Stewart on a tear.  She turned in an excellent, nuanced performance as Julianne Moore’s daughter in 2015’s Still Alice – the same year she won acclaim for her first collaboration with French director Olivier Assayas, in the artistic drama Clouds of Sils Maria.  Now she and Assayas have teamed again – for another ambiguous production, Personal Shopper.  It’s the most unique, and one of the best, pictures so far this year.  And for a film which seemingly falls under the “horror” categorization at the outset, far superior to anything we’ve seen in that genre in a long time.  And Stewart turns in the best job of acting up to this point in her young career.

Maureen (Stewart) is a medium who has recently lost her twin brother Lewis (also a medium).  She visits the old creepy house in which Lewis lived, hoping to receive a sign from him in the afterlife – something they had promised each other prior to his death from a heart condition they both share.  We’re not certain Lewis is trying to contact Maureen during this initial plot set-up, but we presume he’ll try harder as Personal Shopper continues.

The title takes its name from the job Maureen takes as she spends time in Paris, where Lewis’ house is located.  She’s a personal shopper for a vain French actress named Kyra (Nora von Waldstatten) who sends Maureen all over Europe to find expensive dresses and jewelry, yet barely acknowledges Maureen’s presence when they are face to face.  Maureen doesn’t seem to care for her profession, but it pays the bills.  And it affords her the opportunity to try on clothing she’ll likely never be able to afford herself – a strict no-no, per Kyra.  For someone who wears peg-leg jeans, tennis shoes, and a boyish haircut, Maureen seems to have an obsession for these items of clothing.  Later we learn this fixation is sexual.

Now, what does this career choice have to do with Maureen’s deceased brother?  Nothing really, save for the fact that while Kyra is physically of this world, she’s less mentally a part of it than the departed Lewis.  It’s an interesting perspective that would have made Alfred Hitchcock proud. 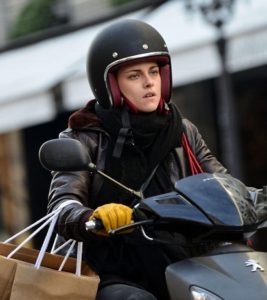 As Lewis’ manifestations become more pronounced, the realtor has found a buyer for Lewis’ eerie home.  Furthermore, Maureen has been contacted by a mysterious texter who seems to know her every move – present and future.  Could this be Lewis?  Another afterlife spirit?  An actual stalker?  Who knew the act of texting could be so engrossing?  It assumes a lot of time – particularly in the middle of Assayas’ screenplay – but it’s never dull.  The texing sequences are harrowing, and some of what we can only presume are Lewis’ “appearances” will make audiences jump.  How pleasingly different from (and far more scary than) the gorefests that typically earn the “horror” label.

Personal Shopper is not a true horror film, in the purest sense.  It is also a mystery, a drama, and a presentation of the burgeoning acting chops of Kristen Stewart.  Her Maureen is an outwardly cool but tightly wound young lady, whose stomach is in knots by the end of the picture – yet her outward demeanor hardly wavers.  Watch for her shaking hands, her eye movements, and the fluctuations in her voice.  She’s so good she doesn’t appear to be acting.  I hope the academy remembers Stewart when it comes time to nominate Best Actress candidates next January.  She’s that good!

And Assayas has churned out another unclassifiable psychological thriller.  I love the way his screenplay announces itself as one kind of film at the outset before changing styles several times throughout – all while continuing to maintain its general creepiness.  But I hesitate to refer to Personal Shopper as a masterpiece, as it leaves a few too many loose ends untied.  Normally I appreciate when a director forces me to use my God-given brain, but there may be just one too many non-resolutions here.  It almost needs another scene or two at the end.