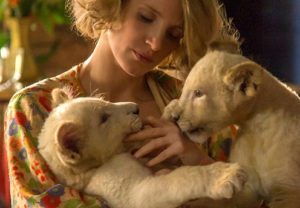 Nick Caro’s latest feature is The Zookeeper’s Wife – based on Diane Ackerman’s 2007 non-fiction work of the same name.  It follows the World War II history of Antonina Zabinski, co-director of the Warsaw Zoo, who provided refuge for hundreds of Jews during the Nazi occupation of Poland.  If this sounds eerily similar to the plot of Steven Spielberg’s 1993 classic Schindler’s List, you would be correct.  In fact, the plot is so similar that comparison is inevitable. In that respect, The Zookeeper’s Wife can’t hold a candle to the Spielberg masterpiece, but it is not a bad piece of filmmaking.

Starring Jessica Chastain (Zero Dark Thirty, The Martian) as Antonina, and Belgian actor Johan Heldenbergh as her husband, Dr. Jan Zabinski, Caro’s saga begins just before the Nazi bombardment of 1939.  We get to know the Zabinskis – in particular, Antonina’s knack for relating to the animals on a deeper level than most.  She’s not a horse whisperer; she’s not a dog whisperer; she’s an all-animal whisperer.  She even helps in the birth of a seemingly-stillborn elephant – right in the middle of a dinner party.  We are led to believe Antonina is something special.

Following the invasion of Warsaw, the animals (per the suggestion of Dr. Lutz Heck, head of the Berlin Zoo, and “Hitler’s zoologist”) are shipped to Berlin where they can remain safe during the war.  Desperate to care for their house, property, and young son, The Zabinskis propose to Dr. Heck (German actor Daniel Bruhl) the zoo be used to raise pigs for the Nazi soldiers.  Heck agrees, so long as the Zabinskis allow him to use a portion of the zoo for his experiments in animal breeding and recreating extinct beasts.

Save haven for Warsaw Jews

It’s a win-win situation until Antonina persuades Jan to house a Jewish friend in their basement.  Eventually, the Zabinski’s big hearts lead them to provide shelter and food for dozens of Jews from the Warsaw Ghetto.  This dangerous ploy involves forging new identification papers, and (in some cases) providing alternative appearances.  Much as Oskar Schindler used the area Jews as factory work, the Zabinski’s efforts to save as many Jews as possible is the real meat of the story – and, like that of Schindler, their story is unknown to most Americans.

Unfortunately, Angela Workman’s adapted screenplay doesn’t allow us the opportunity to get to know any of the Zabinski’s charges – save for one unfortunate teenager who is sexually abused by three Nazi soldiers.  Her story, and Antonina’s resolution to reach her on some level, is fascinating.  I would have loved to see stories of others in the Zabinski’s custody – even if their accounts must be manufactured.  That would have been captivating cinema.

But instead, we are treated to a subplot (undoubtedly manufactured) regarding Dr. Heck’s sexual advances toward Antonina.  Not only does this narrative not advance the far more intriguing adventure of the sheltered Jews, but we all know some of the Nazis mistreated non-Germans.  In fact, we already witnessed the violation of a young Jewish girl in this same film – begging the question why additional evidence to this effect is required.

In 1986, I must have been the only Indiana film critic to not recommend David Anspaugh’s Hoosiers.  My reasoning was that the subplot involving a love interest for Gene Hackman’s Coach Norman Dale character replaced what could have been actual character development of the basketball players on his team.  I have the same complaint about The Zookeeper’s Wife.  The improbable story arc regarding Dr. Heck’s interest in Antonina replaces what should have been the development of the Jewish characters.

Could have been so much better

Late in The Zookeper’s Wife, a family friend begs the Zabinski’s to provide him a safe haven – not realizing the Zabinski’s were already doing so for many others.  When the other Jews file into the living room, the friend breaks down in tears because he realizes the Zabinskis will gladly shelter him as well.  This is perhaps the most moving scene in a fairly milquetoast film.  It should have been harder-hitting – and that could have been accomplished by giving these other Jews some personalities and backstories.

Like Hoosiers, The Zookeeper’s Wife isn’t a bad picture.  Oh, but it could have been so much better.