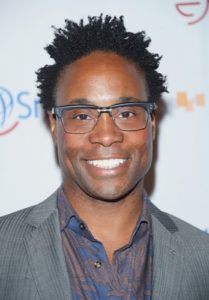 The Cabaret is thrilled to present ebullient triple-threat Tony, Grammy, and Drama Desk Award winner Billy Porter. Porter is a true New York City theater success story. In his cabaret show, the versatile and altogether irresistible Kinky Boots star appears where his talents shine brightest—center stage, performing a heartfelt selection of songs, including his own, drawing on a wide spectrum of styles and emotions.

Billy Porter is a Tony and Grammy Award-winning singer, composer, actor, playwright and director from Pittsburgh, PA. As a recording artist, Porter’s solo albums include his first CD, Untitled, on A&M records, At the Corner of Broadway + Soul – LIVE on Sh-K-Boom Records, and Billy’s Back on Broadway, on Concord Records. He originated the role of ‘Lola’ in the Broadway hit Kinky Boots, which won him 2013 Tony, Grammy, Drama Desk and Outer Critics Circle Awards.

His play, While I Yet Live, premiered in 2015 at Primary Stages. As a director, his credits include Topdog/Underdog and The Colored Museum (both for Huntington Theatre Company)

“Law & Order: SVU,” “So You Think You Can Dance” (as a guest judge), “The Broken Hearts Club,” “Shake Rattle & Roll,” “The Big C,” The Humbling, starring Al Pacino, and Baz Luhrmann’s The Get Down.

Porter’s concerts credits include opening act for Rosie O’Donnell and Aretha Franklin at Carnegie Hall, John McDaniel and the St. Louis Symphony Orchestra, as well as The Buffalo Philharmonic, Peter Nero and The Philly Pops, soloist for President Bill Clinton, and various benefits throughout the United States.