I’ve never seen a Terrence Malick film I’ve disliked.  Most viewers have never seen a Terrence Malick film they’ve liked.  His is an acquired taste, due to the non-linear structure of his screenplays.  And I don’t mean non-linear like Quentin Tarantino’s Pulp Fiction.  No, Malick’s characters are often connected by ideas and thoughts, as opposed to actual occurrences; his films are not plot-driven. 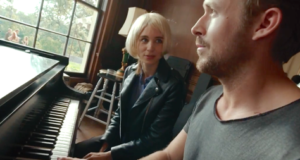 Malick’s latest, Song to Song, doesn’t disappoint – or it does, depending on your point of view.  Suffice to say that if you saw last year’s Knight of Cups, you understand the basic format of Song to Song.  Set against the backdrop of the excitement of the Austin music scene (particularly the young singles who have flocked to this oasis of progressive thought in recent years), Song to Song follows budding musician Faye (Rooney Mara) as she waffles between two boyfriends – Cook (Michael Fassbinder), the music mogul who introduced her to the business, and B.V. (Ryan Gosling), a fellow struggling songwriter and pianist whose outlook on life is as whimsical as Faye’s.

While the three essentially remain friends throughout, Cook eventually takes a new girlfriend – a waitress and former teacher named Rhonda, played by Natalie Portman.  Yes, Portman is too old for this role, but she plays it convincingly.  In fact, she’s almost unrecognizable – especially if you caught her recent turn in Jackie.  B.V. eventually hooks up with a society woman named Amanda (Cate Blanchett).  And that’s about it, as far as plot.

As usual, cinematographer Emmanuel Lubezki shoots the proceedings with a wide angle lens, and a “busy” camera.  It’s not hand-held, but it constantly encircles the characters – even as they spin and twirl their way through musical festivals and love affairs.  And again, Malick relies heavily on voice-over narration.  In fact, Song to Song may just have more voice-over than actual dialogue.  The narration (primarily told from Faye’s point of view) is supposed to be profound, but it often sinks into a level of self-pity which is more annoying than revealing.  The name takes itself from one of Faye’s early voice-overs, in which she asks (nobody, apparently) why she can’t simply live from song to song; from moment to moment; rather than committing to anything.  Fortunately for her, B.V. isn’t any more committal than Faye.

Strewn throughout Song to Song are various cameos by real musicians – talking rather than performing.  The only interesting walk-on is by veteran rocker Patti Smith, who acts as a musical mentor to Faye.  So the business side of Faye’s career is handled by Cook; her musical mentor is Patti Smith; and her boyfriend/fling is B.V.  That’s all you need to know about Song to Song.  The joy in watching this film (as in any Terrence Malick feature) is in experiencing one of the most original filmmakers in history.  That doesn’t necessarily make a great feature – but it’s certainly not like anything else (at least since Knight of Cups).

And there, we must make a comparison.  Coming so quickly on the heels of Knight of Cups, Song to Song pales in comparison.  Even though there is slightly more structure to the screenplay, Song to Song feels empty.  It doesn’t seem as if Malick has anything to say.  He’s obviously enthralled with the Austin music scene; but that doesn’t automatically put Song to Song in the same category as Robert Altman’s Nashville.

Where Knight of Cups followed a Hollywood screen writer (experiencing extreme writer’s block) through affairs with six women, Song to Song lacks an angle.  Yes, there are affairs – but it’s hard to paint Faye’s lack of consistent songwriting as writer’s block when she admits her desire to bounce from issue to issue, from person to person, from setting to setting, like a pinball – with no real direction.  Her inherent desire appears to be to live an existence that is totally reactive rather than proactive.

George Carlin used to have a bit about dogs where he’d explain that dogs are always ready for anything we do, or anything we want them to do – but that they rarely initiate any activity on their own.  That’s Faye.  And unlike Christian Bale’s Rick from Knight of Cups, Faye hasn’t (to our knowledge) experienced any kind of recent deep loss in her life.  Part of the joy (and frustration) of Knight of Cups was hoping Rick would eventually make some kind of connection with another human being.  In Song to Song, we simply want Faye to snap out of it.  I found myself wanting to “direct” her life on more than one occasion – to have some conviction; to stand for something.

Brilliant, but to what end?

Song to Song is perhaps Malick’s most frustrating film.  It is also his least effective.  That doesn’t necessarily make it anything less than brilliant.  But it certainly will not be everyone’s cup of tea.  This one is only for the hardcore Terrence Malick fans.