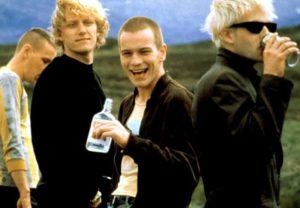 21 years ago, British director Danny Boyle released a film adaptation of Irvine Welsh’s novel Trainspotting.  Relating the saga of four Scottish heroin addicts and the drug sale that made them rich but cost them their friendship, Trainspotting was a hypnotic rave that adeptly used music (mostly punk and new wave), bright colors, and a wide-angle lens to share the highs and lows of extreme drug abuse.  Some scenes were beautiful; others were gross.  It was a minor masterpiece of a British subculture unknown to most American viewers.

Now Boyle has seen fit to provide a sequel – as if any of us longed to know what happened to these punks in the intervening years.  Unfortunately, so much time has passed that the original film should first be viewed again, to remind us of the characters’ personalities and of the conclusion of the drug sale.  In so doing, we recall that Mark, the group’s leader (and smartest, and most levelheaded member), had spent the better part of the first picture sporadically “going clean,” only to be drawn back into heroin’s powerful addiction.  Simon (the one who looked like Billy Idol) was also smart, but suffered from a greater degree of amorality than Mark.  He was the con artist of the bunch.  Spud was the skinny, “dumb” one (who actually turns out to be pretty smart in the sequel).  Spud has the biggest heart of the group, but his weakness caused him to be the least likely to break his addiction.  And Francis Begbie was the hotheaded psychopath who violently beats anyone who crosses him.

Respectively, Mark, Simon, Spud, and Begbie were played by Ewan McGregor, Jonny Lee Miller, Ewen Bremner, and Robert Carlyle.  There was a fifth member, Tommy (Kevin McKidd), but he died of AIDS in the first go-round.  Now our four lowlifes are reunited in the ridiculously named “T2 Trainspotting” – a useless but mildly entertaining reunion of sorts.

Catching up with the characters 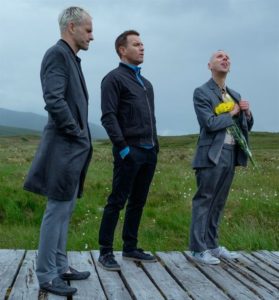 As you might expect, Mark has had the most successful life – although most of it has been spent in Amsterdam because of his double-cross of Begbie at the end of the first “Trainspotting.”  Simon runs a pub, but has his eyes set on starting a brothel.  Simon has “replaced” heroin with cocaine – still addictive, but less deadly.  Spud still suffers from heroin addiction.  And Begbie is still in prison.  Mark just so happens to return to Edinburgh just as Begbie escapes from jail.  By sheer coincidence, the two meet up with one another in a public men’s room – but not before Simon has recruited Mark to help with his brothel idea.  Spud (apparently the handyman of the group) is then hired to refurbish an old building into the shining new bordello.

Inventive spark has worn off

While it’s a treat to catch up with these characters, the spark of imagination which so permeated the first film is strikingly missing in “T2.”  The personalities are the same (and Begbie’s temper is still the source of great humor), and the Scottish accents are the same, but there’s only one heroin trip scene that rivals what we experienced in 1996.  And no scene is as memorable as the “baby crawling on the ceiling” from the original.  Furthermore, I found these characters more pathetic now.  Several of them are estranged from their families, and there is a sense that the world has somehow beaten them down – quashing their hopes and dreams of two decades prior.

Don’t get me wrong; there are some funny scenes – just not enough to recommend it, save for hardcore “Trainspotting” fans.  When Mark and Simon are forced to sing a song at a unionist pub, the ditty Mark invents on the spot is a real hoot.  But there are too many sequences which require us to recall something we saw over 20 years ago.  When Mark first enters Simon’s pub, Simon attacks him.  Without re-watching the first “Trainspotting,” all but the most rabid fans would have a difficult time remembering why Simon was upset with Mark in the first place.

New character is most interesting

The most interesting character here is actually a new one.  Simon’s Bulgarian girlfriend Veronika (Anjela Nedyalkova) is his unwilling partner, along for the ride of developing the brothel, but longing to return to her homeland.  She touches each of the characters in a different way.  She has an affair with Mark, encourages Spud to write the stories of his youth, and finally stands up to Simon.  She also turns out to be the most clever of all the characters by double-crossing all of them at the end.  Her presence is the spark this film requires, and I only wish John Hodge’s original screenplay had focused on Veronika, and used the four original characters in supporting roles.  In this set-up, Veronika could have provided a voice-over narration to help us recall the four Scotsmen and their personalities – as well as reminding us of the plot of the first movie.

I liked a lot of “T2 Trainspotting,” but I simply cannot recommend it.  I remember the first time I watched Peter Bogdonavich’s “The Last Picture Show,” and longing to know what became of the characters.  19 years later, the sequel “Texasville” proved that I didn’t really want to know that badly – or rather, that I preferred to imagine the rest of their stories in my own mind, different as they may have been from those of other viewers.  The same is true here, although more severely so.  As the original “Trainspotting” came to a logical conclusion, I actually did not want to know what became of the characters.  And after watching “T2 Trainspotting,” that desire has been vindicated.