Stevie Nicks with the Pretenders

As previously announced, the legendary Stevie Nicks will appear live in concert in downtown Indianapolis at Bankers Life Fieldhouse on Wednesday, March 29, 2017 at 7:00 p.m. along with special guests Pretenders. Tickets are on sale now.

Due to huge ticket demands and stellar reviews for the 24 Karat Gold Tour, the legendary gold dust queen Stevie Nicks, a Rock & Roll Hall of Famer and  multi-platinum Grammy Award winning solo artist, happily agreed to add a series of shows and continue singing and dancing across the stages of North America performing her classic hits along with longtime fan favorites from throughout her entire career as a solo artist and member of Fleetwood Mac.  Nicks has collectively sold over 140 million albums.

Nicks is best known for both her work with Fleetwood Mc and her extensive, multi-platinum solo career. Collectively, these have produced over 40 top-50 hits and sold over 140 million records, making her one of the best selling music acts of all time with Fleetwood Mac. Her influence in fashion, music and musical performance is acknowledged widely; and as such, has been named one of music’s top 55 “Greatest Songwriters of All Time”, and as one of the world’s top “100 Greatest Singers of All Time”. 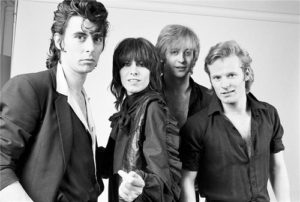 The Pretenders are an English-American rock band formed in Hereford, England, in March 1978. Initiator and primary songwriter Chrissie Hynde is the only consistent member through the years, although original percussionist Martin Chambers returns for the current tour.  The Pretenders saw their greatest fame in the 1980s with hits like “Back On The Chain Gang” and “Don’t Get Me Wrong.”  The Stevie Nicks tour marks the first time the band has played together since 2012.