The Sense of an Ending 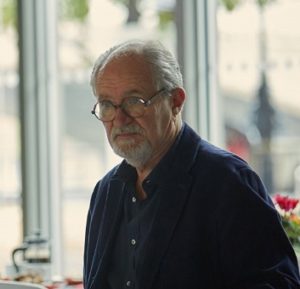 Tony lives alone near London, and owns a (very) small camera shop.  He rises at the exact same time every morning, and likely makes himself the exact same breakfast.  He’s been divorced for some time, but still keeps an amicable relationship with his ex-wife Margaret (Harriet Walter).  His daughter Susie (Michelle Dockery from “Downton Abbey”) is to give birth any day, and (thanks to Margaret’s workaholism), the hospital transportation chore falls on Tony.

Into this serene life comes a certified letter informing Tony that he is now the proud owner of a diary written by his best college friend, Adrian – whom Tony hasn’t seen in years.  Unfortunately, Adrian’s former girlfriend (who had previously dated Tony) refuses to relinquish said diary.  As Tony attempts to make contact with his former love Veronica (Charlotte Rampling, who ironically also starred in 45 Years), we witness flashbacks to Tony’s Bristol University years – in which the events leading to the writing of Adrian’s diary are dissected and filtered through Tony’s mind.  When present-day Tony meets up with present-day Veronica, her version of the past is somewhat different.

At least that’s the way Julian Barnes’ 2011 novel unfolds.  Here we’re supposed to have a sense of Tony’s memory solidifying over time into those truths he believes – which may be different from those of Veronica.  Regrettably, I never felt the perception of memory was a theme here.  Perhaps director Ritesh Batra and screenwriter Nick Payne meant for us to experience some kind of tension between the respective recollections of various cast members, but if so, that stylistic device didn’t work for me. 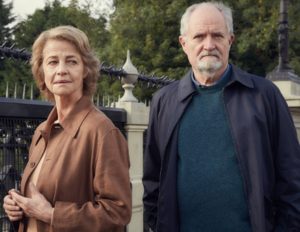 Instead, I take The Sense of an Ending as a mildly interesting story about a situation which was never resolved 50 years earlier, and now has the opportunity to provide closure.  As usual, I prefer stories told with as few flashback cuts as possible.  Save for Tom Ford’s recent Nocturnal Animals, the flashback structure is often annoying.  I typically suggest the entire backstory be told, followed by the modern-day events (or at least stick the backstory in whole – in an appropriate place).  Indeed, Barnes’ novel relates the Bristol story first (in its entirety), then follows with the later events.  Lamentably, the present-day narrative isn’t nearly as interesting as the older material.  Much as I love Jim Broadbent (Remember Another Year?), following Tony about his daily life is about as exciting as watching Adam Driver lumber through his rigid and boring week in Paterson.

The backstory is an alluring tale of hormonal love (between Tony and Veronica) and friendship (Tony, Adrian, and their buddies).  The most striking similarity between the two time settings is the evolution of the character of Veronica.  Played as a youth by Scottish actress Freya Mavor, we learn that Tony was attracted to Veronica because of (a) her beauty, and (b) neither liked big parties.  But throughout their courtship, Veronica was always quiet; she often struggled to find just the right words – unlike her flirty mother, played by Emily Mortimer (who walks a fine line between a realistic portrayal and overdoing the amorous angle).  As an adult, Rampling plays Veronica in much the same way.  She’s aged well; still pretty.  But now, even more off-putting than before.  She still hasn’t forgiven Tony for certain events.  And while I certainly understand Tony’s desire for closure (an “ending,” if you will), I can’t fathom why anyone would be interested in pursuing this woman.

The subplot about Tony’s daughter giving birth nicely bookends the proceedings described above, and serves as a reminder to Tony of that which is truly important in his life.  I liked The Sense of an Ending up to a point.  I’m still not quite sure why Tony’s character had to be divorced – other than it sets him up for a potential romantic interest in Veronica.  This isn’t the best picture I’ve seen so far this year, but it’s always nice to see a film about adults, made for adults.